I left to the lake around 3:30PM and first hit up Jenny's from shore, nothing. I then went and got the boat ready fishing the area around the dock pretty good, no hits. Conditions were sunny with a strong wind out of the SE.

Once I got out in the boat I headed just a little to the East and started fishing the rice edge with my new Payo Buzzjet Jr. At first I don't think I was doing a very good job of working the lure. Due to the wind I was getting blown along fairly quickly. Once I got around the little point at the entrance to our bay I was out of the wind. I decided with the high water to stay shallow right up by shore. I got my first fish on the Buzzjet Jr., which was just a little dude. 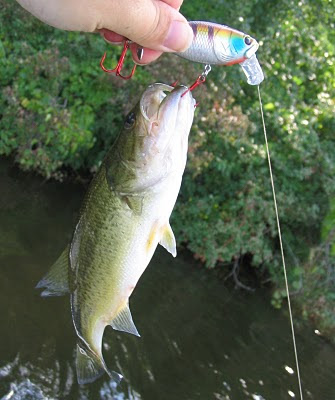 I kept working along the shore and maybe 150yards down I had this 14.5" smash the Buzzjet Jr. 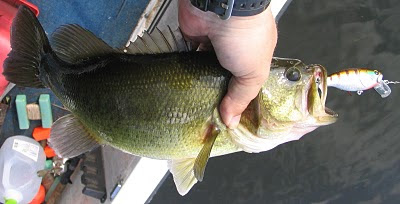 Eventually I got past a little pad field to where the docks start in earnest. I think at the 2nd dock I skipped my bubblegum Zoom Super Fluke under a boat lift and I pulled out this 17" 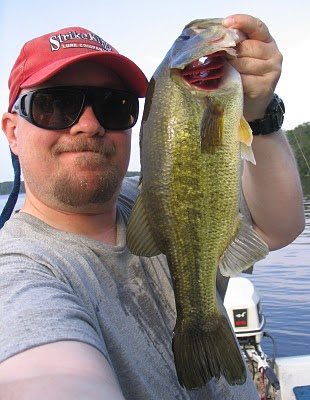 After landing the fish I got situated and cast up under the boat lift again and pulled out a 14+". 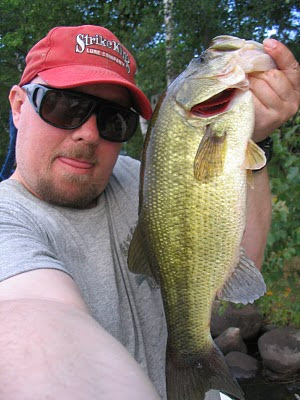 The 17.5" was my big fish of the night; I missed the fish once as it bit and let go before I set the hook, so I pitched back into the same spot between the dock and the boat lift and got her.

I fished about 5 more docks without getting any hits, so I decided with about an hour of sunlight left to hit the slop on Loon Sex Point. I decided to start down along the last 3 docks before the slop starts. Nothing on the docks. I had worked my way maybe 30 yards up into the slop when I had a hit. I let it take the Zoom Horny Toad for several seconds and then set the hook. I missed the fish. I re-rigged the Toad and cast back over the same spot and had a nice bass come out of the water but not hook up. I cast back again and this time caught a 13+" fish. I know the one that came out of the water after the toad was bigger so I cast back over the spot and sure enough I got another hit and hooked up. This bass was just under 15". About 2/3 of the way up the point I had a blow up in a shallow pocket, but I missed it. Didn't get any hits off the end of the point.

All in all, not a bad night.
Posted by Basspastor at 9:16 PM