What a beautiful day. Temps were in the mid 40's and I had a to wear shades it was so sunny. 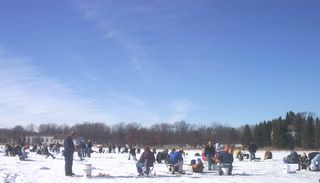 I started the day by heading over to Bulldog lake for the annual Holy Family Church Fishing Contest and Raffle. As it turns out Don Weinmeister and I drove separately for this one, but as I was pulling down the drive way Don passed right in front of me. The contest would run from 12:30-2:00.

We headed out to the lake together, and discovered that NO ELECTRONICS OR SONAR was a rule. Needless to say I was not a happy camper. To me Ice Fishing without electronics is like having dinner without having something to drink. Sure you CAN do it, but why! I find it hard to accept that the electronics give me an unfair advantage when I've used it in two previous Ice Fishing contests this year and won nothing; last week I got skunked. Electronics won't catch you the winning fish, but they will help you catch fish or more fish than you would have otherwise. Basically, the rule excluded one of the main reason's why I enjoy ice fishing. LAME.

Anyway I headed out to what I thought would be the deepest water and when they honked the horn I started fishing. I figured I was in about 23 feet of water which was less than I wanted to be in. In Bulldog the main hole goes down 36 feet or so. I started with Maggots on a Fat Boy but got nothing. Some fish were getting caught just to the South of me. I also watched a girl fishing right by the weigh in car catching sunfish after sunfish. It appeared that lots of small sunnies and perch were being brought up. Also some people to just to the South of me brought up a couple of almost half pound Crappies. I switched to a spoon and jigging a minnow figuring a Pike would be the winning ticket. In the last half hour I switched to a minnow hoping to get a Crappie as that no pike had been brought in and there was a 3 way tie with Crappies.

With about 15 minutes left I took this pic figuring I wouldn't catch anything. 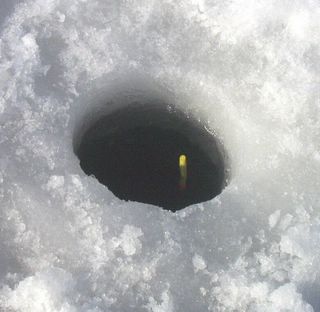 With about 10 minutes left, I missed what appeared to be a Perch bite. With about 4 minutes left I got another bite and it looked very Crappie like so I took my time before setting the hook. It turned out to be a small Bluegill, but hey I wasn't skunked. I took a picture but apparently it didn't transfer into the memory card. I didn't win a door prize at the raffle ohh well.

For the Rest of yesterday's fishing report go to the BP Fishing Log Blog
Posted by Basspastor at 4:01 PM