Today I had to go to Onamia so I figured I'd hit up the Eddy's Jetty and try for some smallies. When I arrived at Eddy's around 5:30PM there was a little wind coming in out of the NE but not too bad. I started on the South Jetty and on my 3rd cast this 17.75" sally sacked the spinnerbait. 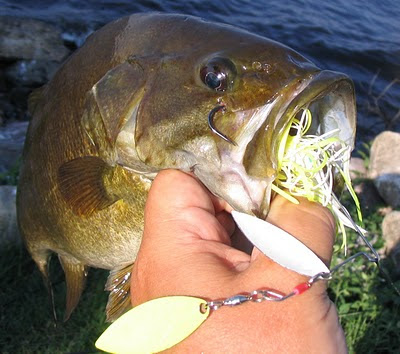 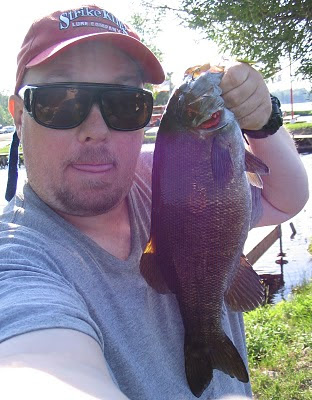 That was the only hit on the South Jetty, and after working through several lures I went to the North Jetty.

On the North Jetty I got a 14" just South of the Corner on the spinnerbait. Just a little North of the North harbor mouth I tied into another around 14" then I lost one about the same size and then a bigger one as I was trying to figure out where to go to land it. I think I had one more hit that didn't hook up on the spinnerbait. I tried some topwater and didn't get any hits, so I tried a tube on a Title Shot Jig and I had a good fish on that got off about half way in. I went back to the spinnerbait and caught one that was probably 14.5" then I got a 15.75" on the tube. I left around 8:15PM. My upper back got quite sore, so I need to head to the Chiropractor on Friday.

I had to stop at the lake place to check and see if there was water in the boat, and of coarse I fished off the dock and off Jim's dock. Didn't get any hits. There was a little bit of light left so I hit up Jenny's and I got a 14" largemouth on a Vikings (purple and yellow) Snagproof Tournament Frog. I kept the bass and gave it to our renter John who loves to eat bass.
Posted by Basspastor at 11:19 PM