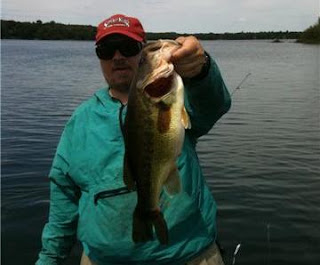 Today was my best day on the water as a Baxter Bass Snatcher. Too bad for me it wasn't tournament day because I would most likely have been a contender for the win. I am pretty sure I had 16lbs+ anchored by the fat 19.25" in the picture (thank goodness my boater had a camera phone as I left my camera in the car).

My boater Guy was fun to fish with and he knows the lake well. I think it was a productive pre-fish, but you never really know until tournament day. We found multiple patterns and locations. Guy was telling me there is an old club saying that "it's fun to catch fish, but it's even funner catching fish in the tournament." Meaning, what you do in pre-fish doesn't mean squat if you burn your fish. Hopefully we didn't do that too bad as we tried to lay off them once located. As for my part I took advantage of conditions, and found something nice size fish were on today; Whether that pattern holds for tournament day will most likely be dictated by weather conditions.
Posted by Basspastor at 9:46 PM