July 30, 2010
Pete is friends with Greg Jones who is an editor and sometime TV personality with Mid-West Outdoors Magazine and Mid-West Outdoors TV. This is the third year in a row where Pete and I went fishing with Greg to help him pre-fish for the St. Stephens Lions Smallmouth Tournament. Last year I got to go out two different times. Greg is an expert in navigating this particular stretch of river which has many treacherous areas.

Originally the plan was to meet around 5PM at the County Park Access South of Rice. I arrived at the Park around 4:30PM and did some fishing from shore. On my 2nd or 3rd cast I hooked up with this 12" smallie on a spinnerbait. 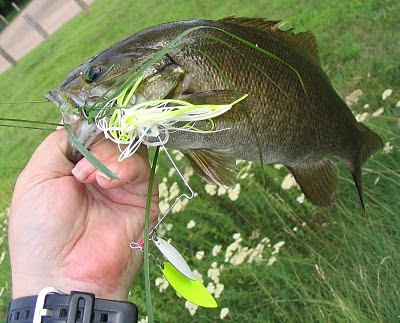 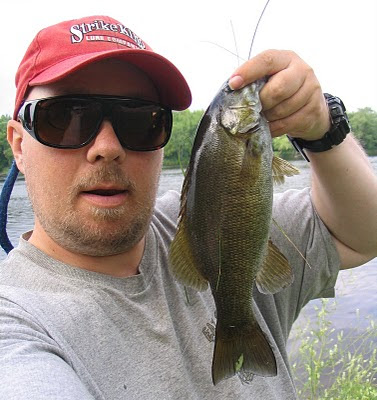 About 20 minutes later I caught a 9" smallie on a frog pattern Rapala Skitter Prop. With this success I thought fishing was going to be good. There was a lot of weeds washing down the river, which was up and running pretty good due to recent rains. FYI- The day was kind of cool (70's) and overcast.

At about 5:30PM Pete showed up to tell me we were launching out of the Royalton Access, so I quickly got in the truck and headed North. We basically started drifting down river right from the campground access. It didn't take long and Pete was hooked with a good smallie which bit a Heddon Torpedo. Pete was unhappy with my attempted net job, even though it was him who was failing to bring the fish into be netted at a proper angle, so he took the net and netted it himself. I made a cast close to the same area with a bullfrog Berkley Frenzy Popper and got a hit from a good fish but it came off after about 4 seconds. Greg thought it was a good fish. Pete started throwing a spinnerbait and caught a fish or two and was getting bites, while Greg got his first fish on a jig. I tried throwing my Mille Lacs Smallie Special spinnerbait but it wasn't getting anything. Pete was getting bites and bumps on the spinnerbait and catching a few decent but not big fish. I think Greg got a fish or two but I don't remember on what. Eventually I borrowed a spinnerbait from Greg because it was obvious my spinnerbait wasn't drawing strikes. I managed to catch two dinks. Pete got this one, which was the biggest of the night. 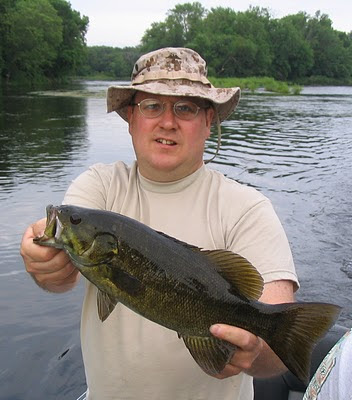 I proceeded to have a muskie smash and steal Greg's spinnerbait, so I borrowed another one. I got this 15.5" fish on that spinnerbait and it was my biggest of the night. 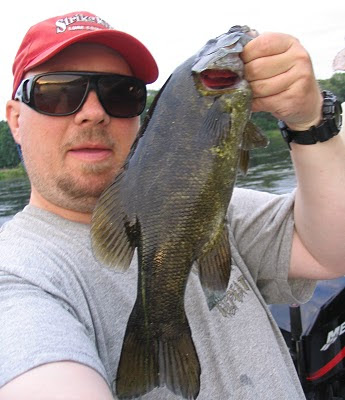 It would also be my last spinnerbait fish.

We made a run up the river farther North than we had previously gone the past two years. As it started getting dark a the surface bite started picking up and I caught a couple of 13" smallies on the purple Berkley Frenzy Popper in addition to missing several bites. Greg and Pete were getting fish too. It was pretty dark when I had a good fish hit the Frenzy Popper. It fought on the surface at the beginning of the battle and then dogged as it got by the boat. Turned out to be about a 4lb Channel Cat. We stopped fishing shortly after that because it had just gotten too dark.