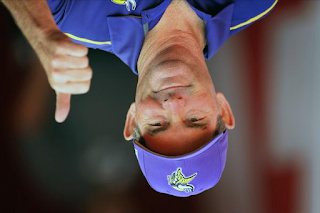 I see that I didn't blog my thought's on Vikings QB's after last season.  I was one who believed we should have re-signed Keenum and Teddy rather than spend the big money on Kirk Cousins.  Both Keenum and Teddy proved to me that they had an "it" factor that makes them tough QBs to beat in big games.  Cousin's had the opportunity to justify the huge contract tonight in Soldiers Field and came up woefully short.  He missed fired on a sure touchdown to Stephon Diggs.  He threw a lousy interception at the end of the first half when we had an opportunity to put points on the board. And with a chance to lead a long game tieing drive in the fourth quarter immediately threw a Bears game-clinching pick 6.  This doesn't mean the season is over, but that was a troubling performance to me, to say the least.

The pressure is now ramped up for next weeks game versus Team Cheese and you know who thrives on pressure?  Aaron Rodgers.  You know who has rep for folding under pressure?  You do Captain Kirk and you failed your first major test.