Not The Morning I Expected, But It's All Good (PB SMB)

After last night's trip to the Grumpy Old Man Hole, I was quite confident when I headed out this morning.  I was a little stunned when forty minutes into fishing the NE side I hadn't even had a sniff and a panfish fisherman showed up and took the SW side.  I switched to the SE side where I have to cast to my right/backhand to get under the bridge.  Also, the casting angles aren't nearly as good because of the way the vegetation and rocks are.  I had one toothy swipe at my Chigger Craw.  After about 20 minutes nothing was happening so I went back to the NE side.  I saw a 17" toothy and sub 10" jumper.  I threw a Spro Frog in the rice, not even a hit, and nothing under the bridge either.  I packed up to leave at 6:30 having not caught anything.

I pointed the KIA towards Mille Lacs, hoping that the rumors I'd been hearing about the smallies going on topwater would work out for me.  With smallmouth, I never know if they are going to be at my main shore fishing spot or not.  I found out on my first cast.
Yeah, it was a small fish, but it hit topwater and got the skunk off.  About 15 minutes later I got another one.
About 15 minutes later I got the big one.  I was really hoping it was gonna go 21 inches.  I couldn't decide what I wanted to do to land it as it was to the North of the harbor mouth.  I was unable to steer it into the harbor, so I ended up shimming down a large semi slippery slab where I was able to grab the fish. 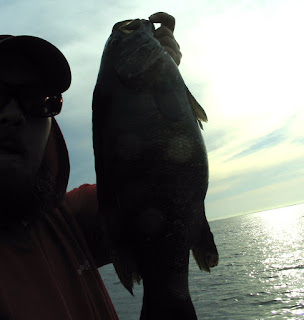 I couldn't see the screen to know I had taken a bad picture and the camera went on the fritz.  A lady and her husband were down front and offered to take a picture for me.  I got the camera to work right again and got the one good pic and one's better than none.  I had to hold the fish upright for about a minute before it swam off.

Clouds moved in and I think I got one hit on the loon colored Plopper that didn't hook up.  At 9AM it started thundering and threatening rain so I left.
Posted by Basspastor at 5:50 PM