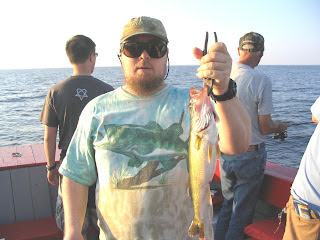 The only fish of the trip for us. 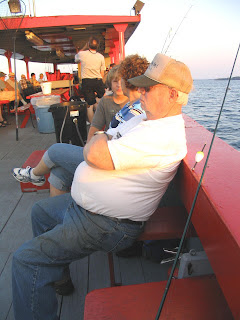 Dad on the way off of Sherman's Point.

The Story: The weather was sunny mid 90's with a slight wind. We elected to fish out of the back of the launch again and where fishing out of the Flagship which is Eddy's Biggest Boat. The Bait Boy said the Flagship was the biggest launch on Mille Lacs and probably the world.

We headed out from Eddy's on a long haul north to Sherman's Pt. We set down in 8ft of water and before you could say fish on some lady caught a keeper walleye and then a 2lb smallmouth. Sherman's point turned out to be more of a smallie than walleye or perch spot. Dad had the first bite and it was a nice smallie that jumped and broke dad's line. More than an hour later dad got another bite but didn't convert. Right after Dad's miss my bobber went down and I landed a walter. This was to be my one and only bite. All in all at Sherman's 6-8 smallies about 4 walleyes (3 Keepers) a few misses and 1 perch. At about 8:30PM we headed out deeper to try and nab some deeper water eyes. In this spot Dad maybe had a bite but I'm skeptical. Out in the deep water 2 walters came in and 1 was lost by the lady right next to Dad.

We were in right at 10PM. The other 2 launches were nowhere to be seen. All in all a nice night but I could have used some water to drink, the two pop's didn't keep me adequately hydrated.
Posted by Basspastor at 12:14 AM