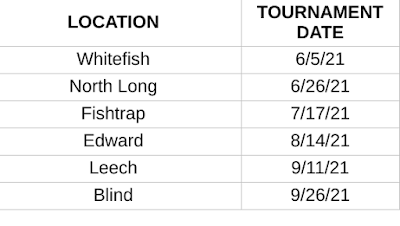 I am reasonably pleased with the exception of the first and last tournaments. Whitefish beat out Platte/Sullivan in a close vote. I don't care for blind tournaments because the chance of getting out to pre-fish with my boater is about nill. All the rest of the lakes were in my suggestions.
Here are my thoughts on the individual lakes:
Whitefish  Chain:  This will be the 6th time I will be fishing a Snatchers Tournament on Whitefish. I've fished with Chuck Steinbauer 6/5/10, Dave Branum 7/15/12, Herman 9/21/14, Mark Munson 9/24/16, and Al Steinbauer 6/1/2019.  Could be a tough one if my boater has smallies on beds and that is all we do. Confidence in catching a limit provided that isn't the case, 100%; Whitefish is a bass factory
North Long: This will be my 6th Snatcher Tournament on North Long (2 of these were Mini-Bucks. I missed the one in 2012 due to back problems. I've never been on the lake this early in the year. Getting as limit shouldn't be an issue I would think.

Fishtrap:  I think there is a high chance Fishtrap won't make the final cut as we only have one away tournament at the moment. I think there is a strong possibility we will go to Pokegama instead. If it does stay on Fishtrap I like the lake. It is a very versatile fishery with good deep and shallow bites. This will be only my second tournament on the lake. I think getting a limit is more likely than not.

Edward: This will be my second tournament on Edward. I was very impressed with the lake in 2018 when we fished it in mid-July. We had 23 limits get caught the last time. I am optimistic about getting a limit.
Leech: This will be my 5th Snatcher Tournament on Leech. This is the time of the year where it could be a wreck fest in the rice and reeds. If that is the case I like my chances of a high finish provided I draw the right boater.

Blind: Possible lakes: Cullen, Alexander, Bordon, Farm Island, Bay, Platte/Sullivan, Pelican, Bay, Gull River, Missippi River/Rice Lake, Rabbit, Mille Lacs, and Fishtrap, if it gets switched out. Having Platte/Sullivan in a blind tournament at this time of the year would be a huge advantage for my boater and I. I have the lake dialed. That doesn't mean they will bite, but I know where the big ones live. Would expect a minimum of a 16lb bag if the wind is favorable.
Posted by Basspastor at 4:29 AM