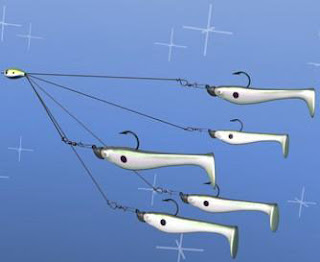 The configuration Alabama (Yumbrella) rig as it is commonly promoted and sold is not legal in Minnesota waters. The rig pictured here is different than using a single lure with multiple treble hooks that is designed to catch just one fish.
Instead, the Alabama/Yumbrella rigs are artificial lure/baits that involve many separate lures/baits attached via wires to a fishing line. Consequently, these rigs are not a single artificial bait/lure, rather a collection of multiple artificial lures/baits each capable of catching a fish.
In the water, the rigs simulate a small school of bait fish and YouTube videos show anglers catching two and even three largemouth bass on an Alabama/Yumbrella rig at the same time.
Minnesota law restricts anglers fishing in inland waters and the Canadian border waters to one artificial lure/bait on a single line. While each artificial lure/bait may have more than one hook (a crankbait, for example), only one lure or tackle configuration is allowed on a single line.
However, a Alabama (Yumbrella) would be legal if not more than one hook or artificial lure/bait is attached. An angler could place a single bait/lure with a hook on one of the wires and attach hookless spinners or plastic baits to the other wires.
On border waters where two lines are allowed, anglers would not be allowed to fish with any other lines at the same time if two hooks, baits or lures are attached to these rigs.
Posted by Basspastor at 12:01 AM