1st Silver Bullhead of the Year

Today Pete and I fished from about 1 to 3PM at Jenny's, Don's, Rock, and the GOMH.  I saw some small sunfish at Rock and a little pike and I presumably had my pink Cubby and a minnow bit off by a pike.  We saw  Kuske at the bridge.  That was it for action.

We headed back out at 6PM

When we got there was 2 guys fishing the SE side.  That got a jumpin bullhead and told us crappies were biting at Little Rock Lake.

Pete was 1st on the board with a jumpin bullhead.  He got it on a beetle spin.
Next up was me getting a high 4lb JB on my Panfish Chatterbait. Chatterbait is in it's lip. 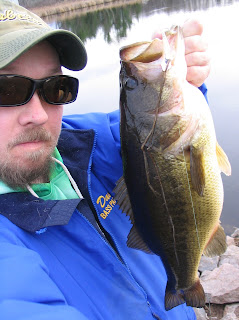 A while after that Pete and I got doubles on 2lb jumpin bullheads.  Another guy showed up and started fishing the SE with me.  He was at the steps and I was on the Eastern shore.  He caught a jumper on his minnow and I went back to the SW side with Pete.  The other guy got a couple more jumpers and I missed a bite on my glow Cubby and minnow.  An Eagle flew over and circled and then we noticed another Eagle up in a tree just to the West of us.  Eventually I got another bite and it was quality silver bullhead. 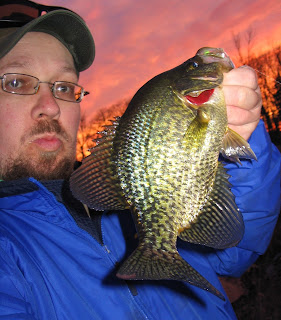 A little while later I got another on the Cubby.  Kevin Wotceck showed up and said he was getting fish at Fish Lake;  He didn't fish.  The guy across the way got a silver which he ended up giving to us.  I didn't get any bites on the lighted bobber and Pete was so busy messing around with his to be worthless.  One other guy came by and saw we were getting fish.  I expect their will be a crowd tomorrow provided it doesn't rain.
Posted by Basspastor at 11:11 PM