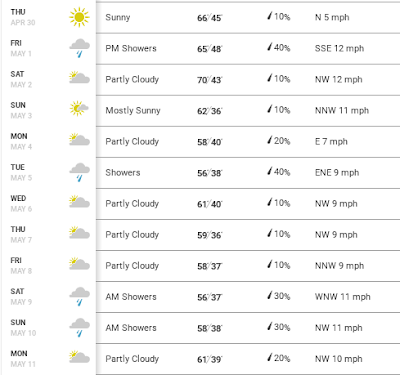 The Weather:
It looks like it may be wet and cool, which is better than wet and cold. OK, 37 degrees is cold when combined with rain or wind, but right now it says showers which may mean not much precipitation.  And judging by the winds if it holds around the 10mph range, that probably means winds diminishing in the evening and picking up during the day.

My Plans Right Now:
As for my 2020 Opener, the plan is my usual Eddy's Jetty at Midnight And every night thereafter until the night ban starts.  Ice will basically be off the lake for two weeks at that point and it doesn't look like we are going to jump into June temperatures so the fish should still be shallow where I can get them.  Last year they were shallow throughout June.

The Big Question I Can't Answer: Will the motor on the Trophy be working by Opener?
My optimism on this question has diminished significantly.  None of my original ideas were as easy as they first appeared and now I'm in a time crunch. I most likely will have a boat on the water for Opener. It may be the Slop Slip in Platte/Sullivan, Rock, Erskine, Long, or Bulldog.  Or maybe I will outfit the Trophy with two trollers and launch that somewhere and do put and takes like it's the Slop Slip.

Update on the Big Question:  Hopefully, I didn't jump the gun on this.  I still had one iron in the fire still on my original ideas.  I didn't hear back from him last night, so today I took it upon myself to drop The Trophy and Motors off at a local Marine/Small Engine place. He had no idea when he would be getting back to me.  Obviously, this is the busy season for marine and small engine repair.  So now I wait and plan on using the Slop Slip on Opener unless a miracle happens.