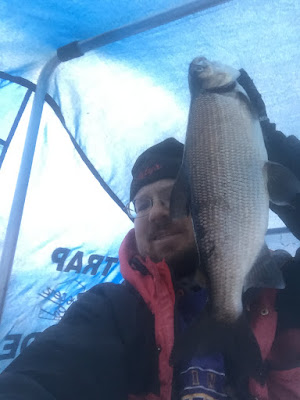 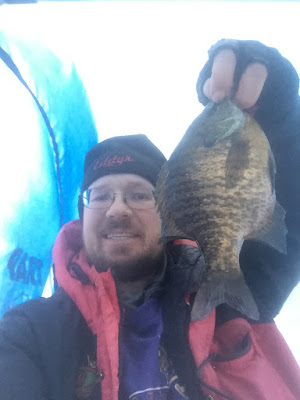 I got out a little later than I should have.  There was snow on the truck and on the road.  As far as I can tell I was the second one at the access.  A couple of trucks drove on when I was unloading.  I walked out which ate more time.  It was quite windy.  I got to the area drilled three holes and put the camera down first.  Then I put waxies down on the bobber rod.  The first fish of the morning was the bull gill that bit at about 7:50AM.  I was not on point with keeping the fish. I had to fill a bucket with water using the hawg trough in hopes the fish would survive if I wanted to release it.  That took time and the fish went belly up so I had to keep it.  I'm pretty sure there were others down there that were gone by the time I got my line back down. About had an hour later the tullibee showed up.  There were at least two of them by the marks I had.  Fortunately, I got a bite and hooked it in the shoot.  Excellent fight.  I got the camera and transducer out, but I got caught up on the bobber line.  Landing these slippery things is tricky.  I was using 3lb test. After that, I might have had one more tullibee come through. But who knows I also had crappies come through that I got to see on the camera.  I watched a crappie charge the Fly and suck it in, but I didn't connect with the hookset.  I had perch messing with me by the bottom and eventually put the camera down to watch them.  It was quite windy and my right foot was cold so I called it a day at 9:30.