Bulldog Again After Plan A Almost Fell Through 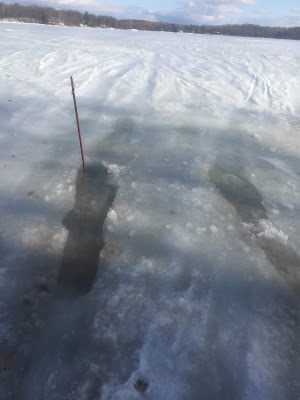 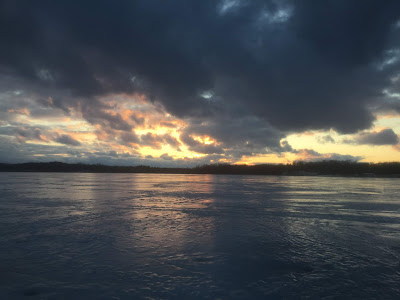 The plan was to drive out to the sunfish spot on Rock Lake put the camera down and if I didn't see anything head to Bulldog.  I had just gotten onto the lake when I sunk down the front tires in the slush.  Thankfully there was strong ice underneath.  I quickly put it in reverse and got outta dodge.  I realized I had forgotten the maggies and wax worms, so I drove back home to get them.  Then I headed to Bulldog.  The wind was blowing pretty good.  I drilled two new holes and put the old Aqua View camera down.  There was a school of crappies in the area.  For some reason, I wasn't able to figure out which direction to point the camera, very frustrating.  After messing around for about 10 minutes I gave up. The first fish was a crip that hung me on the transducer line and got off.  I then put the Aqua-Vu Micro down and quickly located my lure.  The crappies had moved off and sunfish moved in.  Occasionally crappie would swim through.  I caught 2 crappies on the VMC Fly and 2 on the Glow Demon Spoon.  I caught 5 little sunnies.  Didn't see any perch.  Didn't get any bites on the minnow. I packed up at 8:30PM.  On the way home I got pulled over by a cop because I  have a headlight that doesn't work.  I got a stern talking-to because I didn't pull over right away electing to drive to the Club of the Pines.  I saw someone pulled over the other day on 8 and noticed it's a very narrow shoulder.  I got off with a warning.

4 Crappies
5 Sunfish
Posted by Basspastor at 5:15 AM