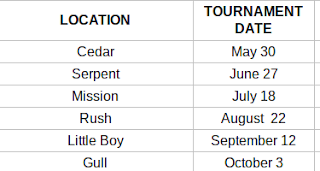 Cedar Lake (Aitken): This will be my third shot at Cedar Lake.  The first two didn't go so hot.  I only caught 3 keepers both times.  I am not impressed with the Lake as a bass fishery, but this is the time of year to hit it. On the positive side, both of my boaters did well and neither of them is in the club anymore so I can spill their secrets if I can remember them.

Serpent Lake (Crosby): This will be my 4th tournament on Serpent.  I really like this fishery.  I've caught a limit in each tournament including a 3rd Place and Lunker the first tournament I fished here.  If weather conditions are right this is a lake that gives me a legit shot at winning a tournament throwing topwater.

Mission Lakes: This will be my 7th tournament on Mission.  All but one of those were in the Fall.  Midsummer will be all new to me.  The lake has never been particularly kind to me save for catching the Lunker the last time I fished here.  I can do well in this tournament provided I get a good draw and we are of the same mind coming into the tournament.  In all previous tournaments, I didn't get to pre-fish with my boater.

Rush Lake (Ottertail):  This will be my second tournament on Rush Lake.  The first one was a bust as my boater's spots just weren't holding fish.  I managed to avoid the skunk by catching my only keeper in the last five minutes of the day.  I liked the lake from what I've seen of it, but it intimidates me a little bit.  It's a long drive and chances are that I draw someone with little or no experience here. Gulp

Little Boy/Wabedo:  This will be the third tournament on this system, not counting a MN Muskies Inc. tournament I fished way back at the dawn of this century.  I really like these lakes.

Gull: This will be my 4th tournament on Gull.  I've never been able to pre-fish the Lake.  I think we are going out of a landing on the North end of the Lake, which will be new to me.  Chances are good that my boater will know the lake and be on fish.  Somehow the last tournament I fished here that wasn't enough to get me a limit.
Posted by Basspastor at 1:58 AM