Bulldog Lake Again with A Couple Of Bonus Pic's 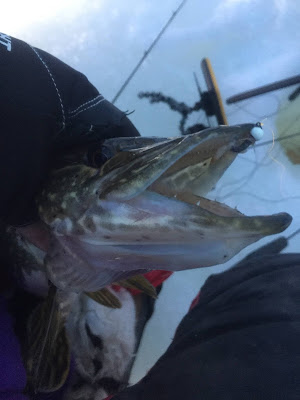 I must have arrived just after Matt W. left.  I went out and put the camera down in some of the holes he drilled.  I only saw one sunfish, so I headed to the NE Point where I have been fishing.  Some guys were on the lake earlier in the day and drilling holes like madmen on the NE and N side of the lake, there dozens upon dozens of holes drilled.  I used their holes to find fish with the Aqua-Vu.  It took me a few for me to locate any fish.  Not a good sign as fish were all over the place every time I've been out.  I finally found a group of sunnies and put two additional holes there.  By the time I had any lines down the sunfish had moved off because pike were patrolling the area.  First fish was presumably a pike that broke my line at the dropper, so it wasn't a bite off.  My mistake, shouldn't have happened.  A little while after that I caught a pike on the Glow Demon and Minnow.  I then got a nice bluegill. Then I got the pike in the pictures that snuck into camera rage when I wasn't looking.  When I looked back, there he was with my jig in his mouth.  I'm was lucky I hooked him at the tip of the shoot.  I saw a couple more pike swim through and couple crappie swam through but didn't look at my lures.  I did catch a couple other decent gills and played keep-away with some small ones.  I did move out to 10' when it was too dark for the camera but didn't mark anything until I was all packed up and about to leave.

I'm probably going to fish somewhere with Matt W. tomorrow
Posted by Basspastor at 4:41 AM