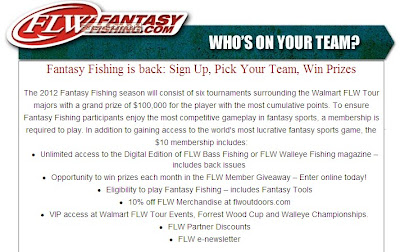 That is right, it's going to cost you $10 to play FLW Fantasy Fishing this year.  I thought not such a big deal and signed up, but then I learned they only have Prizes to 10 Places and that is ONLY FOR THE END OF THE YEAR!  WHAT THE HECK!  Seriously had I known they would not be giving prizes for every tournament I would not have paid.  Turns out the money is not refundable.  I wrote FLW and told them I thought this is bullshit.  I would much prefer they split the $100,000 top prize into smaller amounts and have nothing for the end of the year.  I just can't believe it, Seriously 10 winner for the whole year, it's just sad.  B.A.S.S. now totally kicks FLW's ass in Fantasy Fishing.

I advise you save your money and go by scratch off or Powerball lottery tickets instead.
Posted by Basspastor at 1:37 PM