Tonight I wanted to try hitting a new spot, but first it was old one's. I was under way just after 7PM.

Shakopee Bridge- People fishing so I went to Subway.

When I got done eating my Subway it was getting dark fast. I elected to try back at the Shakopee Bridge. I got chewed by mosquito's, but my Crawtube also got chewed by this 16.5" largie. 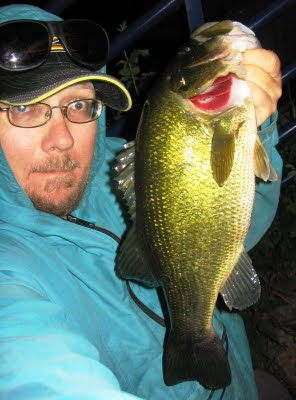 I did have a couple of other hits that didn't hook up. After it got sufficiently dark I decided to leave. I decided not to hit Eddy's Jetty as the skeeters probably would have been pretty bad there too and I didn't have a headlamp.
Posted by Basspastor at 10:57 PM

So I've noticed that often hit several spots when you head out to fish. Are you fishing all of these spots from the bank?

I don't own a boat, so all of my fishing is done from the bank. Any bass fishing tips you can offer to us bank fishers that might help with landing a few more?!?