This afternoon I wanted to get out to throw a Zoom Super Fluke and get more experience with the Trokar Flippen Hook. I headed out to the GOMH at about 5PM and started on the NE side. My first offering was the bubblegum Zoom Super Fluke and I caught a 12" jumpin bullhead right away. A little bit after that I missed a bite, which tore the nose up on the Fluke, so I had to go to the car to get another. I then started throwing up under the bridge and missed a couple of hits. Finally on the 3rd try I hooked up and it was a good one. 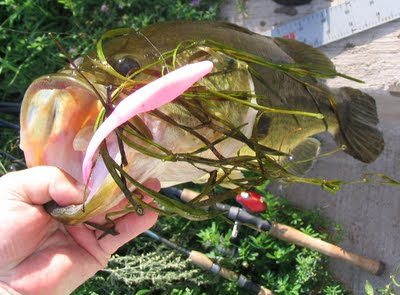 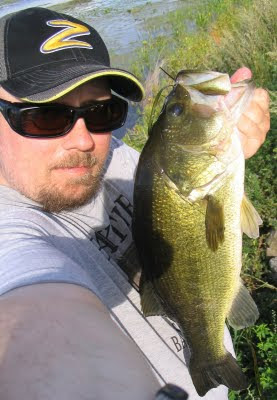 She went 19.5". Unfortunately when I pulled the hook out I stuck myself pretty good in the finger and started bleeding pretty good. I had to run up to the car to see if I could find a band aid or napkin. While I was doing that a lady showed up to fish. Before I could get back to fishing two boats also went under the bridge. The lady was after sunfish and she fished off to the NW side so I was still able to cast under the bridge. Unfortunately I think the boats spooked the fish I think that were there. Eventually I did pull a 14" jumpin bullhead. I tried the Crawtube and missed one hit. Then I worked the pads and slop with a Grass Pig and Mad Maxx, but didn't get anything. The lady hooked into a 13" class bass and was bringing it up onto the bridge when her line broke and the fish got away. I went and fished the SE side and got a 13" on the Fluke which I gave to the lady. I missed another hit. A thunderstorm started moving in so I left around 7PM.

Posted by Basspastor at 8:16 PM

The Zoom Super Fluke looks like it works for you pretty good! What other colors do you use besides bubblegum?