Yesterday I headed to the Grumpy Old Man Hole around 3PM. GOM Willard was there along with another older guy. There was couple fishing the SW side and the NW side they both has a few nice orange bullheads and the guy on the NW side said he got a jumpin bullhead. I couldn't get anything. I thought I might have had something pick up the Crawtube way under the bridge, but it let go right away. The others left and I kept trying. A young lady all by herself showed up and started fishing. Neither of us got anything. I tried the SW side and there was a Rattlin Rap sitting there. I went up to the North side and asked if it was the lady's, but she said no. That is when I noticed it was cracked. No action on the South side, so I headed up to the car and started long casting to the slop from the road. The lady I gave a jumpin bullhead to the previous night showed up so I went and talked to her. She said after I left she had several bullheads bite, but was unable to catch any. She said the fish I gave her was good. Then she told me the story of "the Demon Fish" she encountered out there last year. Me and the young lady got a kick out of her story. From the description it sounded like either a pike or a dogfish. Tonight Willard told me it was a dogfish. Anyway I left and headed to Jenny's. 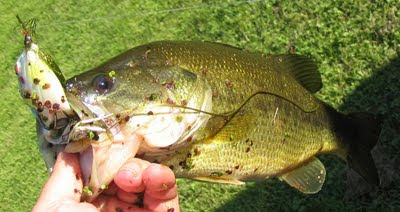 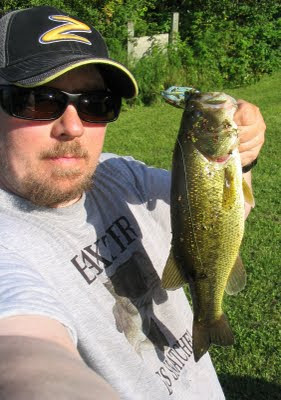 That is a Mad Maxx Frog big sexy color.

After that I headed to the Rock Dock. I was fishing a Crawtube when I got a hit and caught this little dude. 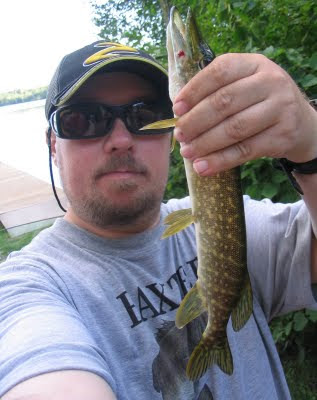 And that was it for the night.

Tonight I headed out to the GOMH a little after 7PM. As I was getting my stuff out of the truck GOM Willard showed up. The lady from the last couple of days was there as was another guy and his son fishing on the N side of the bridge. The lady says she caught a big fish last night. At first I thought it was a jumpin bullhead and I was bummed she kept it, but then it became clear it was a toothy bullhead instead, so I didn't care. I went down to the SW side, which was dead. After about half and hour I headed to the NE side. As I did the lady had a fish putting a serious bend in her pole, it ended up breaking her off. The older kid said it was a toothy bullhead. Willard came down by me and spotted a bobber that was under the water. I tried casting to it but the bobber disappeared, probably that lady's fish. We saw what we thought might be a dogfish surfacing out by the channel pads, It may also have been that lady's fish with the line stuck in the weeds causing the fish to swim at the surface. Whatever I couldn't get it to bite. I was pitching right in front of me when I had a hit on the grass craw Tonka Tackle Halo Crawtube. I set hard, but into nothing as a pike had obviously shredded my line and stole that Trokar Flippen Hook. Now I'm down to 2 hooks.

Not wanting to go back to the car to retie I started throwing the bubblegum Zoom Super Fluke. One time I pitched it out to the hole right out in front of me when something grabbed it. I thought it was going to be that pike, but when I set the hook I immediately saw it was a big bass. It stripped drag and almost got into the pads but I was just able to keep it out with the 14lb Fireline. I pulled it in to the kid who was down on the rocks and he lipped it. I figured this was the same fish I caught 2 days ago and sure enough it was the same length at 19.5" 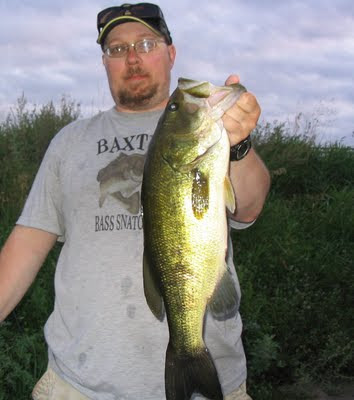 This was the only fish I caught.
Posted by Basspastor at 10:46 PM