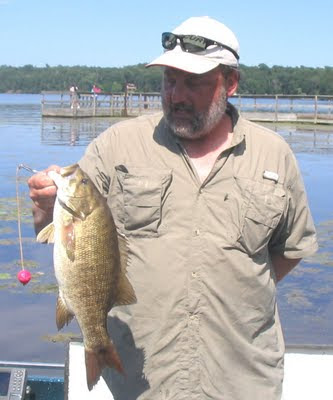 Conditions- Temps started in the high 60's and went up to the low 80's. Sun and light winds.

I believe we blasted off around 10 to 7AM and my boater Paul and I headed upriver. On the way we got passed by 2 or 3 boats. Thankfully none of them were headed to our starting spot. Our starting spot was a fair sized backwater lake with clear water and excellent looking weeds where we had a few bites in pre-fish. We started at the mouth of the lake in the river and worked our way in. It didn't take long and I was casting to the area I had a blow up on my hookless spook during pre-fish. Unfortunately nobody was home. We worked our way North against the East bank in excellent looking rice with pads. After about 20 minutes of working the East bank. I started throwing the big sexy Mad Maxx frog to the West out where there were some small pad clumps with submergent weeds that reached the surface. As I was pulling onto a pad clump I had a fish boil on the frog. When I came off the pads, there was no follow up so I reeled in and cast back to the spot. This time after I came off the pads something hit the frog but didn't take it. I let the frog sit than slowly started working it and this time the fish came up and took down the frog. I got a fairly good hooksett and felt the weight of the fish, but then my frog came flying back at me. I don't know if it was a bass or not, but missing my first bite was not a good way to start the day.

Eventually we started running away from the East bank and started fishing to the West while moving South. Man was this some prime looking water. On one of my casts to this fabulous looking stuff a 18" Largie that went 3lbs 10ozs smashed my rainforest yellow Spro Bronzeye Frog. Man was I glad to have her in the boat. Not only would I not skunk, but I had a quality fish. As we worked our way South and started moving to along out from the South Bank I started throwing a yellow Zoom Horny Toad. On a cast back out to the North to some isolated pads with submergent weeds that were to the surface I had a bass blow up the toad. I set the hook and my telescopic 7'3" St. Croix Avid broke in two at the telescoping point about 9 inches above the reel. Holding just the rod handle with the rest of the rod in the lake, I just continued to crank and was pleasantly surprised when a 14.25" largemouth was still attached to my hook in a mess of weeds. Breaking the rod really sux as it's one of my favorites and they no longer make that model. I had 2 of them, so now only 1 is left.

We worked our way back towards the mouth of the lake and my boater Paul had a blow up on his frog out by the river. The fish didn't get the frog, so I told him to cast back and see if it would hit it again. He cast back and sure enough he had another hit and this time he hooked up. In the process of catching the fish and getting it in the well we drifted out to where the lake mouth met the river. I cast a green pumpkin Lake Fork Craw tube upriver to a small point in the rice and sure enough I had a hit. I laid the wood and brought another 14.25" into the boat. We kind of sat there and worked the area and then started moving up river to the North. I had what I think was a pike flash at my Crawtube, but it didn't get it. Subsequent casts didn't produce any bites. We kept moving North in the river pitching to the rice wall. After doing that and not getting anything in about 20 minutes we switched to the opposite shore which is a big rice island. As we were making our way to the head of the island, I had a bite, but it was a rock bass.

At the head of the island we met another club boat and they only had 1 bass at that point. We moved up river aways and fished the West rice line down to up river of another backwater. Once we got about 25 yards past the mouth of the backwater, we fired up the big motor to run back to the mouth. We had a couple of bites in this backwater in prefish. Even though there was baitfish activity, we didn't have any luck and we headed out after covering about 50 yards.

We went back to our starting spot and basically ran the exact same loop. We got into the same general area where I had lost that first fish, but the boat was now West of the isolated pad clumps. I was throwing a white Zoom Horny Toad and had a bite in close to the boat. The fish pulled on the Toad but didn't hook up. I pitched the toad back into a weed opening and let it sink. As I was kind of working the Toad in place, something came and took the Toad. I set the hook, but didn't hook up and the Toad was pretty ripped up. Probably a pike, but who knows. I quickly got the Toad re-rigged and threw back into the weed opening. Nothing. We worked through the great looking stuff and as we were working off the South bank. I caught a pike casting out to isolated pads just like with my 2nd bass. Just a bit after I got the pike, Paul caught a small bass.

Eventually we worked our way back out to the mouth. We were sitting in the mouth when I had a bite. I had the fish on long enough to see it was a pike before it got off. I was pitching into the rice right behind the boat, when I saw my line jump. I thought for sure it would be a bass, but I pulled out about an 16 inch pike.

Next we headed to the spot where another boat started on the East side of the rice island we fished before. Another club boat was working the East bank on the channel of the river. They had 2 fish and 1 fish. One of the guys said he had caught 5 or maybe it was 6 species of fish. We worked our way up the East bank of the island, so we were casting West. I had a bite, but came up empty on the hooksett. I pitched the Crawtube back to the spot and it hit it again. This time I hooked up. Dogfish!!! As I was playing it next to the boat and it got off. Up river a little ways I got snagged and had to break off. I started pitching a small Gander Mountain green with multicolored fleck beaver. As we got up toward the head of the island I had a hit and set the hook. The tails of my beaver were gone. I tried pitching back to the spot tailless but didn't get anything. At the top of the Island we were able to talk with the boat we met at the top of the island before as these guys were working up the West side of the river. I think they had 2 fish a piece and had lost some fish.

There was about an hour and a half left at this point and as it seemed the main river rice just wasn't being productive so we headed up to Little Rabbit Lake. As we were taking the channel in, another club boat followed right in behind us. They were sitting at 4 and 0 with the 4 being smallies that they went way up river for in the morning. They started fishing a point and so we went to the next point down the lake. I had re-rigged a green pumpkin Crawtube and started throwing that. As we worked the point I got a few bites, including one that was very promising, but every hooksett came up empty. After we got around the point we moved to another weedline. It was pretty dead until we got to another little point. I had a bite and set the hook catching yet another little pike. With about 10 minutes left to fish we went and hit some slop, which was fruitless.

We got back with about 5 minutes to spare.

Results- My 3 bass went 6lbs 9ozs, but I had a 2oz dead fish penalty. Without the penalty I would have been 10th, but I dropped to 11th out of 24. 11th Place wasn't a bad finish as I placed ahead of all 3 guys that I am in competition with for the final two spots in Top 6 for the end of the year standings race.

The winning bag of 18lbs came from way up river and consisted of 5 smalls and 1 Larry. The 2nd (16-8) and 3rd Place (16-7) anglers reportedly stayed in Rice Lake and just whacked the snot out em' on weedlines with Crawtubes. 5 limits were caught, which is actually pretty good and there were 3 bags with 5 fish and 2 bags with 4. I was the only 3 fish bag, 8 guys had 2 fish, 3 guys had 1, and there were 2skunks. 6 of the Top 10 anglers came from the same 3 boats.

Analysis- I knew going in this one was probably going to be tough and every fish was critical. Losing that first bite in the morning was unfortunate, but it might not have even been a bass. I may have had the bites to get a limit, but probably not. The fish dying on me was just bad luck as it was a bleeder. Actually my big fish was also a bleeder that I didn't think was going to make it, but at the end of the day that fish was in great shape. I wish we would have had more time in Little Rabbit as a limit came out of there. I also found myself wishing I had a Zoom Super Fluke to try in the weed pockets of the lake where we caught our fish. After I broke the rod, I put a Horny Toad on my dipper rod. I could have put the dipper on my Herb's Dilly rod, but as it was I didn't throw a dipper at all.
Posted by Basspastor at 3:55 AM