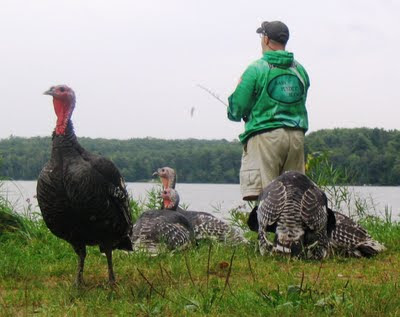 Pete was still around today, so we went fishing around 4PM. First we hit Bulldog at Holy Family and got nothing. Pete then suggested we try Erskine and so we went there. I didn't realize the Erskine public access is actually worth fishing. It has some nice pads right out from shore and there is quite a bit of area to fish. Anyway while we were fishing some domesticated turkeys came along and sat down right behind me. Pete was amused by this and took pictures. While the Turkeys were there I had a fish hit at my white Berkley Havoc Grass Pig twice. Somehow I didn't hook up either time. Eventually we left with the turkeys still wanting to follow us.

Next we went to Rock where Pete had 2 bites on his pink spinnerbait. The second fish got caught in the reeds and Pete's line broke. I think I had one hit on the Crawtube, but it dropped it before I could set. It started to rain.

Next we headed to Jenny's where we amazingly couldn't get hit.

Next we headed to our Lake Place where I got a 15"+ on the River2Sea Frog by a clump of pads up by shore. Didn't have the camera with. I had another fish show at the frog, but I couldn't get it to hit a second time. I think it might have been a dogfish.