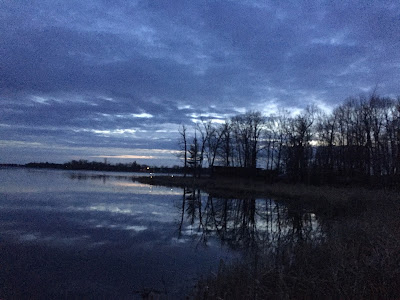 I went up to Baxter today to pick up my new Garmin Striker 7SV. It just so happened that Frabill Minnow Buckets were on sale, so I picked up a new one. I also got a Kalin's Tickle Tail and B-Fish-N swimbait to try out. Watched a video yesterday of a guy whacking eyes on the Tickle Tail. It is supposed to be a cold water smasher, as is the B-Fish-N. For some reason, I had never tried a B-Fish-N lure even though they have a cult following among walleye fisherman. Talked with Snatcher Chuck on my way home. The rents went up to the Brothers for dinner. I got into the Garmin unit and read the instruction that I needed an SD card to download the latest software. So I wasted a bunch of time trying to figure out a way to do that. Turns out those instructions are obsolete; it doesn't take SD cards. I found that out after I got back.

I got to the GOMH a bit later than I wanted with all the screwing around. Fatso was up in the tree again. It looked like things were open to the south shore of the Big Island. It was getting dark, and I wanted to hit the NE side, so I made what was going to be my last cast on the SW side.  As I was bringing my bobber slowly in, I thought to myself, I've got fish in this exact situation before. About 5-seconds later, the bobber went under. I set the hook, and my line broke. It could have been because I didn't re-tie from the other night, but I think it was probably a toothy. I then fished another 20-minutes or so on the SW side with the lighted bobber, nothing. I thought I saw an eyeball swimming along the SE side when I was headed in. I fished until about 8:20PM. A nice bright full moon showed up around 8PM.
Posted by Basspastor at 6:36 AM