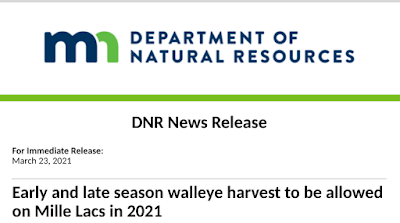 Early-season walleye anglers on Mille Lacs Lake will be able to keep one walleye 21-23 inches long or one longer than 28 inches. Summer will bring catch-and-release walleye fishing, with a mid-season closure, before the potential for a one-fish limit returns in the fall.

“Lower walleye harvest this winter is allowing us to offer some open-water walleye harvest this year,” said Brad Parsons, fisheries section manager for the Minnesota Department of Natural Resources. “We’re glad Mille Lacs anglers will have the chance to keep a walleye on opening weekend and Memorial Day weekend — two of the most popular times to fish during the year. We also hope to be able to allow some harvest this fall.”

The one-fish walleye limit will be in place from Saturday, May 15, through Monday, May 31. Walleye fishing will be catch-and-release from Tuesday, June 1, through Wednesday, June 30. A two-week closure — implemented to reduce hooking mortality — will be in place from Thursday, July 1, through Thursday, July 15. Catch-and-release walleye fishing will resume on Friday, July 16, and continue through Wednesday, Sept. 15.

After opening weekend, fishing hours on Mille Lacs Lake will be 6 a.m. to 10 p.m. for all species. Beginning Saturday, June 5, muskellunge and northern pike anglers using artificial lures or sucker minnows longer than 8 inches can fish after 10 p.m.

The one-fish walleye limit is scheduled to resume Thursday, Sept. 16, through Tuesday, Nov. 30. During the late season, the DNR also will allow anglers to fish from 6 a.m. to midnight.

“Our projections strongly suggest that fall harvest can occur,” Parsons said. “However, predicting fishing pressure, catch rates and weather involves some uncertainty so we want people to recognize that the fall harvest will depend on how much of the state’s 2021 walleye allocation remains as we approach September. As always, we will monitor the factors that determine the state’s walleye take throughout the open water season.”

The state and the eight Chippewa bands that have treaty fishing rights agreed Mille Lacs could sustain a state harvest of up to 87,800 pounds of walleye this year, unchanged from 2020. During the 2020 season, state-licensed anglers took 66,748 pounds and tribal fishing took 33,113 pounds.

This year’s winter walleye harvest was about 16,000 pounds, about half of what it was in 2020. Lower catch rates for anglers, combined with fewer people fishing, caused the harvest to return to normal levels after a big spike last year. That drop in walleye take gave the DNR more flexibility to implement a one-fish limit during the early season and plan one for the late season.

Even with the drop in winter harvest, a two-week closure during what’s normally one of the hottest times of the summer remains necessary to protect walleye. As water temperature increases, so does hooking mortality — the tendency for fish to die after being caught and released. Protecting walleye during this vulnerable period can allow for many weeks of harvest during cooler times of the year.

To help avoid incidental catch of walleye during the two-week closure, fishing for any species with certain kinds of bait will be restricted. Anglers targeting northern pike and muskellunge can use sucker minnows longer than 8 inches. But anglers targeting other fish may not use live, dead, preserved, or parts of minnows, nightcrawlers, worms, leeches, or crayfish.

“Our goal with these regulations is to meet the state’s treaty obligations while also providing the best possible experience for anglers, recognizing that fishing and the anglers it brings are economically important to the Mille Lacs Lake area,” Parsons said.

My Thoughts:
I am happy to see them expanding the fishable time in the Fall to midnight.
Posted by Basspastor at 12:39 PM