1st Topwater Fish Of the Year

I didn't plan on catching topwater fish tonight as it only got to 52 degrees today,  but after hearing something get hit on the surface for about the 5th time, I thought what the heck I've got my Phantom's in the car and rest is history.

I got out a little later tonight thanks to a call from Pete and me eating ice cream.  I didn't get the boat ready today because I got tired around 1PM and I slept until 4PM.  I decided to hit Rock Lake first again tonight.
When I arrived and was doing my stretching I noticed Mr. Beaver down the shoreline.  I didn't grab my camera quick enough and he slipped into the water.  I started out throwing a D & M Piranha that I don't think I'd even thrown before.  I had a hit on the first cast but didn't hook up.  I fan cast from North to South,  when I got to almost as far to the South I would be willing throw it was fish on.
On my very next cast to the same general area I got another bigger one. 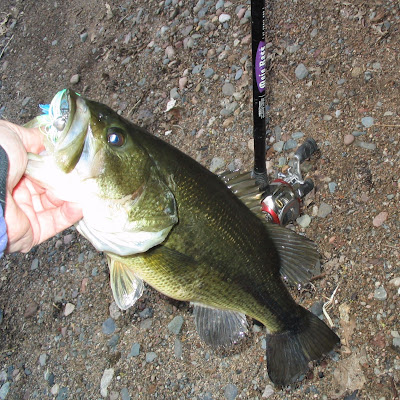 I thought school maybe, but those were the only two I got.  Next I went to the H2P XPress Jerk Shad, nothing on the chrome, but I got a hammerhandle on the chart shad.
Then I started throwing a craw tube.  That's when stuff started getting hit on the surface.  Two fish swirls in close succession to my South with the closest being just out of casting range convinced me to give the Phantom a shot.  I tried to the South first with no luck.  I made a long cast to the North about even with where I was standing on the dock parallel to the shoreline.  When I was letting it sit on the initial cast the 18" blew up on it.  I could tell it was a good fish because I got a good look at it when it struck.  The fish ran straight for me and I had to reel furiously to keep up.  I was a little disappointed that it's body wasn't filled out.  I had another fish blow up and miss to the South as I was retrieving.  I let it set and it came back and smacked it. 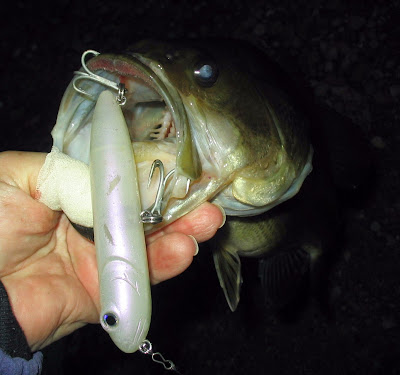 That was my last bite at Rock.

I missed a good fish at Bulldog again tonight on a craw tube.  I pretty sure I had it hooked, a dogfish maybe???   I didn't hook up on a couple of other bites on the CT.  I switched to a Chigger Craw and got a 14.5" on that as well as missing a couple of bites.

Peter was the only person at the GOMH.  Willard and another GOM had been up there tonight.  He wasn't having any luck, not even bullhead bullheads.  No current, no fish, no good.  I didn't get a bite either.  Didn't see any activity with the spotlight.  That sucks!
Posted by Basspastor at 1:58 AM

Interesting how those top water bites will pop up at times you would least suspect. I had a good time of it when the sun was still quite high and I was in open water. I only took it out because I was bored and not getting hits on much else.