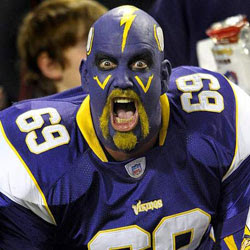 Two weeks into the season and the purple has held the lead at halftime twice. This week the lead was 17-0 and the Vikings are now 0-2. This really doesn't bode well for the season as we just could not afford to lose a home game. In the 2nd half there were a couple of questionable calls by the ref's that just killed the Vikings and a few Viking mistakes that were equally as damaging. I am not sure if the Bucs are a good team or not. They had 12 wins last season, but all but 1 of there wins last year were against mediocre to bad teams. The Bucs lost week 1 by 7 at home to the Detriot Lions. Today at home Detriot kicked the crap out of the KC Chiefs but it kind of looks like the Chiefs are a bad team. Detriot may very well be a pretty good team this year. The Vikes play the 2-0 Lions next week at home.

It seems clear to me that Donovan McNabb needs to pick his game up as he is missing too many throws. Offensive line play needs to be better, no doubt. On the bright side our running game has been very good both weeks and the defence is getting a few turnovers. Something is backward with the running game being so good, yet being unable to hold a lead.

Maybe it will get better next week.
Posted by Basspastor at 3:48 PM

As a Tampa Bay fan I can say I was ok with the outcome. :) It was a good game. If both teams had played the entire game it would've been a great game, rather than a half each.

The Lions will be good until Stafford inevitably goes down for the season and they don't have anyone to throw to C. Johnson.