There is a dam on the Rum River on the South end of Ogechie Lake in Kathio State Park. I've known this dam exists, but have never tried to fish it because I didn't feel like paying the fee to get into the park. However this year with the success I have had at the Shakopee Lake bridge over the Rum I figured I better check out what I have been missing. It's $5 for a day pass and $25 for a 1 year pass; Your first $5 day pass can be applied to a year pass.

Today was cold and windy, so I wasn't going to take the boat out to Platte/Sullivan, so I figured today would be as good a day as any to check out the dam. I arrived at Kathio around 1:30PM and after paying my dues and one wrong turn I made it to the proper parking lot. It's about an 1/10th of a mile hike from the parking lot to the dam. Thanks to looking at Google Earth I was aware of this and had packed my tackle into my small bag. I brought 6 rods with me.

The wind was out of the NW which meant the dam was sort of protected a bit. The water is on the high side and flowing fast. I started out throwing topwaters but didn't get any hits. Next I put on a Strike King Pure Poison with a Berkley Havoc Craw Fatty trailer. On my very first cast I had a good fish on. What would it be? Smallie? Largie? Pike? Muskie? Walleye? Carp? Dogfish? It kind of got caught up in some grass by shore, but I was able to pull it through and it was a nice largie. 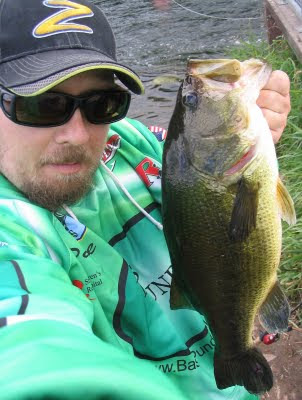 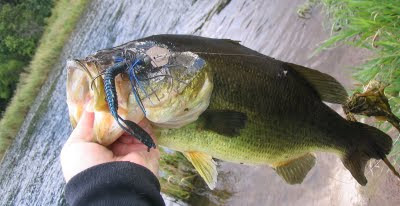 It was a hefty 18.25" and with that being the 1st cast I thought I might be in for a whackfest. However I soon discovered there were not a bunch of fish stacked up and waiting to bite. Eventually I lost the Pure Poison to a snag. I cycled through a bunch of lures over the next couple of hours without a hit. Eventually I put on a pink chatterbait knock off that I bought on Ebay a couple of years ago. I made a long cast across the river and got hit by this little pike. 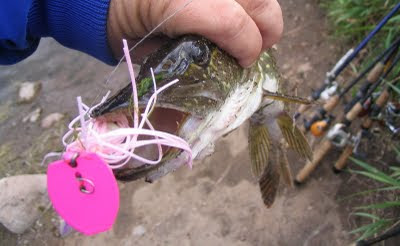 A little while later it started to sprinkle and then rain, so I went and stood under a tree as I didn't have raingear with me. After about 15 minutes the rain stopped and I went back to fishing. After about 10 minutes a guy showed up to fish. Unfortunately this was his first time fishing there, so he couldn't give me any information about how the spot fishes throughout the season. After about 10 minutes it started raining bb to pea sized hail. That lasted about 5 minutes then it rained for a couple of minutes and quit. At that point I had enough as I was wet and getting cold. I left around 5PM.

On the way in and out I hit the Shakopee bridge, but it was dead except for a hit from a very small pike.
Posted by Basspastor at 11:32 PM

I never have been a fan of fishing in the rain.