Good Night At the GOMH

I headed out of the house a little before 7PM and my first stop was the Grumpy Old Man Hole. The wind was blowing pretty good out of the South. Per usual I set up on the NE side. I started out throwing something new; A watermelon/red Big Bite Baits Bio Bait Crawtube. The BBB Crawtube is made of a biodegradable plastic that has "Bio Bait" scent which is slimy and stinks. They are on sale at Tackle Warehouse for $1.99 a pack and since I was getting some other things I couldn't resist picking up a few packs at that price plus a 15% discount for Labor Day. They are 4" just like a Lake Fork Crawtube, but they are more compact and less bulky than a Lake Fork CT.

Crawtubes have been my #1 bass catcher this season and obviously I was hoping these inexpensive baits would be fish catchers. I fished for about 10 minutes without a sniff and then on a cast to the middle of the channel just out from the bridge something nailed it, but when I set the hook nothing was there. I kind of figured it was a pike, but I kept casting to the area anyway. On about the 7 cast back something picked it up and this time I hooked it and it was a good fish.

She went 18.5". GOM Willard drove up just as I was taking pictures. He congratulated me on the nice fish and told me he had gotten a couple of jumpin bullheads yesterday, but nothing that big. I let her go and resumed fishing. A couple minutes later I had another hit and brought a 14"+ jumpin bullhead in. I offered it to Willard, but he didn't want it. A couple of casts later I got an 11" jumpin bullhead. After about 5 more minutes with nothing I headed to the South side. I got a couple of nibbles, but nothing to set the hook into. By the time I got back to the NE side it was getting dark pretty quick. I decided to throw a frog and on about the 3rd cast it got belted good up in the rice. It was obviously another good fish. 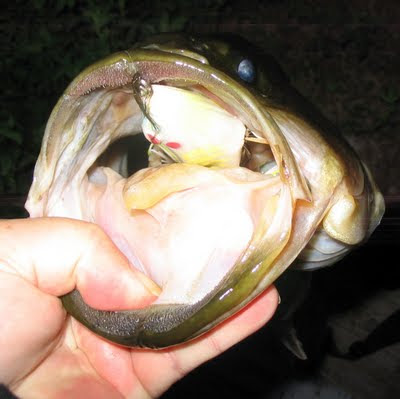 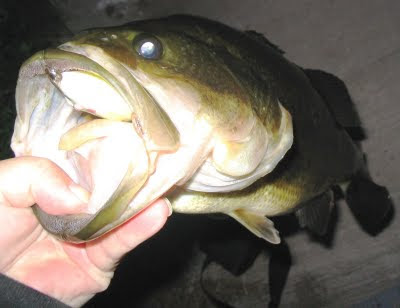 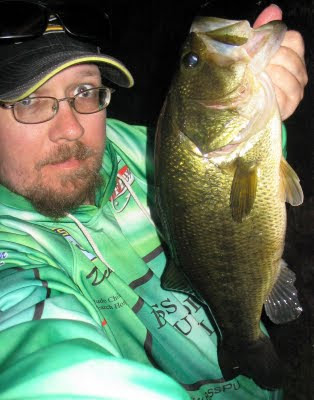 I did get one more hit on the frog in the pads, but I think it was a pike. It got dark fast and I left a little after 8PM.
Posted by Basspastor at 11:19 PM

Nice fish. Check out our new blog: www.tournamentfishingradio.com
Thanks