I got up to Birch Lake in Hackensack with my boater Owen on Saturday Sept 24th. We arrived at the Lake a bit before 8AM. It was a cool morning with heavy fog. Because of the fog we weren't gonna run anywhere, so we just picked a direction and went. We started off on docks, but that was a bust. I started throwing a topwater out into the lake and I was rewarded when this 16.5" busted on my lure. 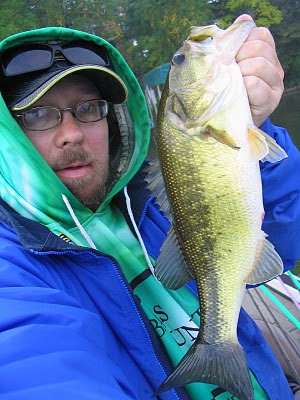 That fish kind of clued us in to work on the weedflat and about 10 minutes later I got a very similar fish. At that point I switched to a buzzbait. Owen got a couple of bites on a subsurface bait. I pulled a nice bass on the buzzbait, then a small pike. I had a couple of other fish slap at the buzzbait and not get it. The fog lifted as we had pretty much worked our way across that flat. We tried some reeds for a while and I got a hit on a dipper and it bit my tail off, so it was probably a pike. One of the guys from the Bass Snatchers came by to say hello and then took off. We worked some shallow pads, reeds, and docks but nothing was going so we headed out to see if we could re-find some good weeds with a little more depth and we did. We basically drifted in the wind a long way across a weedflat. Not much happened until we started getting pushed towards a certain shore line. I pulled a small pike on a black spinnerbait. A little bit after that I threw up by some reeds and I got another hit. I could tell right away it was a good fish. It turned out to be this pike. 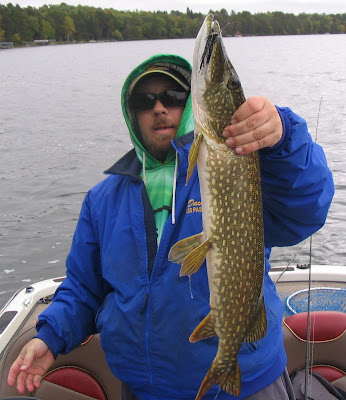 I went to net it and when I got it's head in the net my spinnerbait broke in two. You can see the hook end in the pike's mouth. The blade got caught in the net, so I didn't lose that which was nice.

It was cloudy at this point and wind was blowing in on this shoreline. Owen tried docks, while I casted out. That wasn't doing anything, so we shot out onto the weed flat. After about 10 minutes of that with nothing. We decided to head to the Western basin. When we got into the other lake, there was another Snatcher boat up the way, so we stopped to talk to them. They said they had gotten one good fish. We took off and went to a spot Owen thought looked good. It produced a giant. 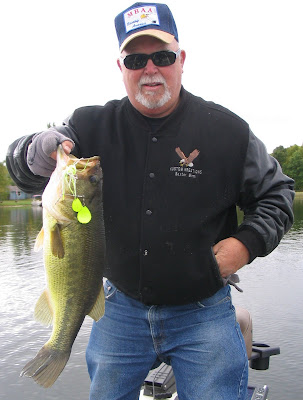 It measured 21". I felt really bad Owen got this fish in pre-fish and not the tournament. We worked the area and didn't get any more bites.

Next we moved up shallow into some pads and reeds. We got a couple of biters but the fish were smaller than what we had been getting. After we were done in that area we did a little cruising to look around. We stopped at a spot I thought might be good. I had something hit my spinnerbait but it didn't hook up. There were weeds and a weedline so I started throwing a crawtube and something thumped it. I thought for sure it would be a pike, but it was a 17.75" largie. We worked the area but couldn't get any more bites. Owen got a call about a family emergency and so we had to leave around 2PM.

My impressions: It would be nice if topwater played on tournament day, but conditions will determine if that will go. What we found was pretty sporadic, so I don't really know what to think about it. Owen may get out to pre-fish one more day and I think that will be very helpful if he does. I half wish the pre-fish was tournament day as I was putting together what I believe would be a competitive bag. Hopefully weather will be favorable tournament day as I think the lake could fish really well under the right conditions.
Posted by Basspastor at 1:14 AM