I Disagree With This Headline 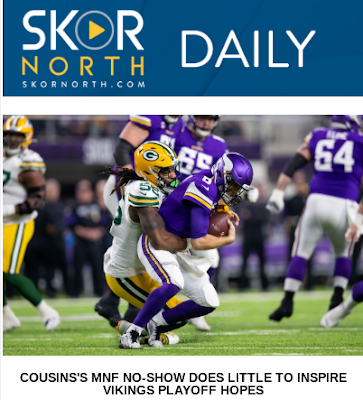 Kirk Cousin's play was not high on the list of why the Vikings lost to the Packers on Monday night football.  Adam Thielen dropped a perfectly thrown ball that he is normally money on.  Instead of a momentum building big play on third down, Kirk is credited with an incomplete pass and the team has to punt.  The gadget play with Diggs throwing the ball to Kirk was there and Diggs missed a wide-open Cousins.  We had the Packers defense fooled and let them off the hook;  This missed opportunity as a momentum shifter cannot be overlooked.  We didn't score another point.  The running game was almost non-existent probably due to bad Offensive Line play.  The Offensive Line flat outplayed poorly with multiple sacks and pressures with only 3 or 4 guys rushing.  Kirk had that 4th quarter touchdown pass taken away due to one of our linemen getting beat and having to hold.  On the interception, Diggs has got to make a better play on the ball either not allowing the interception to take place or making the tackle and thus not allowing any kind of return.  The Offensive staff clearly got beat by Green Bay's Defensive staff.  The team failed Kirk way more than the other way around.
Posted by Basspastor at 5:56 AM