We pre-fished on Wed July 27th

I met my boater Paul at the Lum Park a little after 7AM. He showed a bit late and I took a few casts from the park beach. I did get a bite on the Crawtube, but I didn't hook into anything. Paul has the only Triton in the Baxter Bass Snatchers, almost all the other boats are Rangers.

Anyway Paul said we would start off by taking a tour and we ran up river a long way to Little Rabbit Lake. I was surprised by the clear water in Little Rabbit. We just looked and didn't do any fishing. We saw baitfish activity as the channel from the river entered Little Rabbit. As we were on our way out Paul wanted to take a side channel, but it was filled in with weeds, so we went back out to the river and entered the side channel from a different spot. It was a backwater with rice and pads that went back to a few docks and this is where we started fishing. Nothing.

Next we went back to the river and went to another back channel on the North side of the river. This channel had rice, pads, and a lot of duckweed. Paul pulled a nice bass out of the duckweed on a frog, but that was it. I was throwing a Strike King Rage Toad.

We went back out to the river and drove down aways to another backwater on the North side that's entrance was choked by rice. This was a long backwater with rice, pads, and duckweed. Paul missed a blow up on the frog. I was throwing the Rage Toad and a bubblegum Berkley Havoc Grass Pig. I had what I'm pretty sure was a pike swirl on the pig a couple of times. Paul tried to get it to hit his frog, but it wouldn't. After fishing quite aways in we went out under power of the big motor.

Next we started fishing by drifting along the rice on the main channel on the North shore. After drifting for a while Paul pulled a good bass that just smacked his Crawtube. Ron Lindner advised that I fish with cut off hooks, so I had put tubing over the hooks on some of my lures. I was fishing with a black/chart Terminator Jig with a green pumkin/chart Berkley Havoc Craw Fatty with the tubing on the hook. I thought it wouldn't hurt to stick a fish doing what we were doing because it would be unlikely to come across the same fish doing this in the tournament, so I took the tubing off. Well I got a bite and set into this 19.25" slobberknocker. 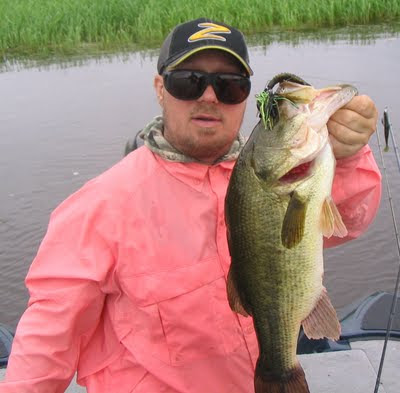 With this fish, Paul thought we should try the same thing on the South side of the river, but this time using the trolling motor to move up current. Almost right away Paul pulled a small keeper bass. I started pitching a junebug Crawtube. I did get a couple of bites, but they would only nibble a couple of times and let go. Paul had the same thing happen.

Eventually we moved into a backwater on the South side of the river. Once again it had rice, pads, and lots of duckweed. It looked phenomenal for bass and dogfish. I cycled through a few different things and I put on a gold Strike King Rage Shad. I was really digging working that bait. On one of my casts I got nailed by what I thought was a nice bass, I saw the fish hit. It was holding onto the bait, so I asked Paul if I should hit it and he said yes. Much to my surprise when I brought it in, I found a chunky 24" pike on the end of my line. We fished into this great looking backwater quite aways, but that was the only hit.

Next we moved out and went to a backwater on the North of the river. This one looked a bit different than the other backwaters we had been in. The water was clearer, there was good submergent vegetation, the rice had a good mix from thick to sparse with pads, no duckweed. We also saw quite a bit of baitfish activity. It looked like awesome dipper water, so I threw the Havoc Grass Pig in a couple of different colors. Paul missed a blow up on the frog. I was hauling water with the Grass Pig. A little later Paul pulled in a nice keeper bass on the frog. I decided to throw a spook that didn't have any hooks. The spook got hammered by a fish and we decided we had seen enough for the day and headed in around 1PM. It had been overcast the whole morning and only started to get hot and muggy around noon.

All in all it was a pretty productive pre-fish.
Posted by Basspastor at 2:41 PM