Conditions: Mid 60's to 70's, MC to Cloudy, 3-8mph NE
The Day: Nate kicked my butt yet again, and I couldn't even get a freakin limit, the end.
We were the last boat out and headed South on the main lake. We were fishing along a weedline. Nate put a dink in the boat first. Then he got the bullhead, which we both got a laugh over. Shortly after that, Nate got his first keeper of the day.  My first keeper bit a few minutes later on a black/blue jig and hit on the fall. I think Nate put another keeper in the boat. I lost something at the boat when I wasn't able to put my reel into free spool in time when a big fish went on a power run, and the hook popped out of the fish's mouth. 80% chance it was a big pike, but I never saw the fish, to be sure. It bit the jig as I was reeling it back to the boat. Nate was getting his bites on a craw tube, so I switched to that. I threw a long cast out and got bit by a good fish. 3/4 of the way back in, it spits the hook.  My hook point was still Texposed and in the plastic. That clued Nate into what the fish were doing, and he started catching them pretty quickly.  I got my second fish on the black/blue jig sometime after Nate started culling.

I think we left the first spot around 9AM. Nate continued to cull with a better quality fish as we bobbed up and down on the waves. I got my big fish on TRD creature. I don't remember if I got my second bass at the second stop or the 3rd. Nate continued to upgrade at our third spot. I was getting bites on a craw tube, but the fish would let go and not come back, and I pooched several hooksets as well, very frustrating. At 10:30, I was in good shape with 4 fish in the boat and a 2lb plus average. I think Nate had his final fish by Noon. My final fish came on a craw tube and was the only double we had all day. I missed a couple of other opportunities to double up. We stopped getting bites on the main lake, so with two hours left, we headed to 371. Nate caught 6 or 7 that didn't help in 371. I missed a couple of bites, and the frustration got to me as I messed around with my tackle rather than keeping the craw tube in the water. Neither of the two tricks I had up my sleeve got me a bite.

Time was up, and I was a fish short of a limit. So frustrating.
Results: My fish weighed 9/7 which put me third from the bottom in 20th Place. Nate had 16/14, which put him in 5th. Jim Smith took the win with 18/07. Lunker went to Bill Ludenia with a 4lber, and he took second with 18lbs. And Chuck Steinbauer beat out Dennis on the tiebreaker to take 3rd Place.

So what went wrong:
My tackle prep was what cost me in this one, I'm pretty sure. The 17lb line I was Texas rigging with was probably costing me bites. I did have a rod with 12lb Flouro in the boat, but it wasn't spooled with enough line. It was the rod I was using for the black/blue jig. It's a reel I used last year for dock skipping, and I didn't catch the fact that I needed more line. When I was casting the jig, I kept getting hung up on the knot to the backing. I should have re-spooled the reel or just brought another rod combo; plenty of room in Nate's Ranger.

My lower back was stiff, which affected my hooksets, and for some reason, my upper back started bothering me around 10am. I haven't had upper back issues this year and for it to happen when I was fishing bottom contact baits is just unexplainable.

My sense of feel was just off. I pulled the craw tube away from multiple fish.

My Final Thoughts: It just wasn't my day. The odds are pretty good this will be my throw-away tournament and worst finish for the year, on to Fishtrap. 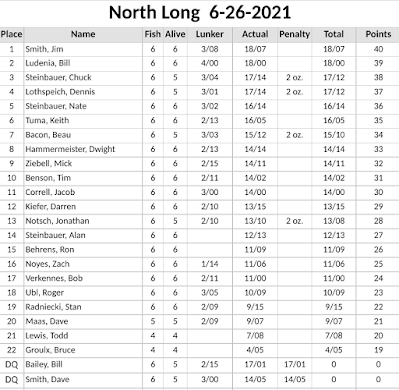 Posted by Basspastor at 1:32 AM