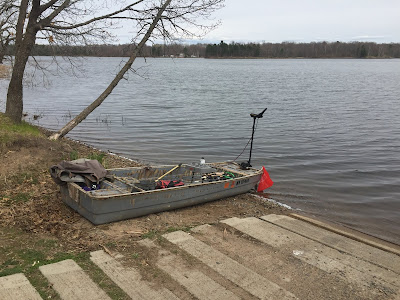 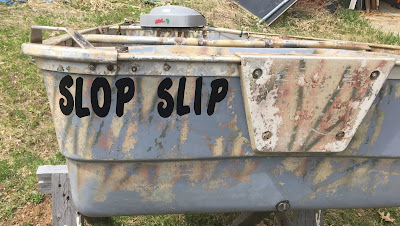 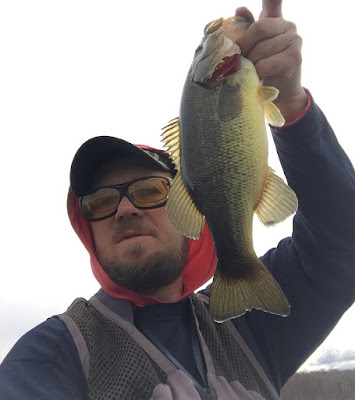 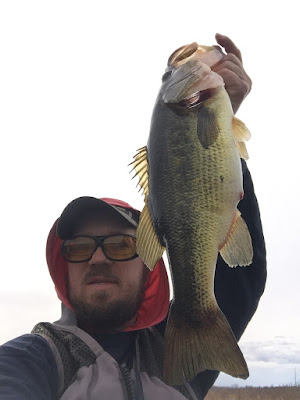 I got the lettering put on the Slop Slip and because the winds were light I thought I would give her a trial run.  It could have gone better.  I elected to go with the 55lb of thrust Min Kota.  I think that is overkill and it doesn't tighten itself to the boat easily.  I found that out when I was pushing the boat into the water and it fell in the lake. Good thing I had the batter terminals attached.  I fished it right out and it worked fine.  On the way to the RPRO, I didn't have the troller adjusted right with it being to low in the water.  I ran into the log on the bottom at full speed.  I was lucky nothing broke.    I then didn't follow my plan of making my way to the beaver dam but drifted/fished my way there.  The first thing that happened was a fish swirled on my orange Rocket Bobber; That happened at least a half dozen times.    Shortly after that, I caught the 13 inches.  The water level is low.  I didn't see much baitfish activity and kept having to pick off weeds.  I landed one bass on THE JIg, One on a craw tube, and one on the Poison.  I also got a pike on the Poison.  Missed a bunch of bites.  I never found any concentration of panties and lost the one for sure sunfish I did have on.  The water was pretty clear.  It would be really nice if the water level came up 6-inches.  Because I was struggling to find the pannies I turned in at 6PM.
Posted by Basspastor at 3:16 PM