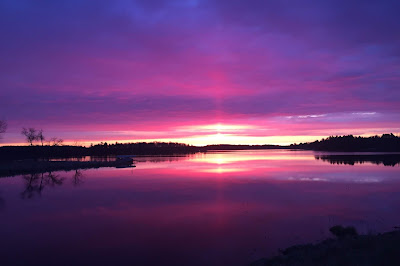 I don't think I have ever done a postmortem on a Fishing Opener.  I don't think I've ever used the word postmortem in a sentence before either.  Well, by golly I'm killing two birds with one stone today.

My 2020 Fishing Opener was discombobulated right from the start.  I was getting my lines set up at 5-minutes to midnight on Eddy's Jetty when I got a surprise visit from Casino Security informing me that Eddy's was closed.  I kind of figured that out when there wasn't a car in the parking lot.  Thankfully, he didn't kick me out right away.  I got to fish unit 2:00AM when he came by again and told the 5 of us that were fishing there that we had to leave.  I managed to get 4 eyes landed while losing two lures.  The first was an Ultimate Jerk Shad that broke off at the spool when I backlashed precipitated by my line guides freezing up.  The second was an X-Rap Shad Shallow because I didn't check my line for frays after the backlash.  So I lost my first bite of the night.

I made the best of getting booted from Eddy's and tried a spot I was aware of but never fished, the rock point at Mac's Twin Bay.  It wasn't what I expected, but there was a spot for me to cast from and I caught the pig there, so two thumbs up.  I also had a big walleye break me off and saw a mid-30-inch toothy critter swim by.

The GOMH gave up a couple toothy critters to me and a couple of jumpers to Delroy's Crew.  I caught a small bass at Bulldog.

I got a surprise phone call in the morning letting me know the Trophy was ready for me to pick up.   I waited until 4PM to pick it up, which was a mistake because it was sleeting out pretty good at that point. I wasn't gung ho about getting soaked so we didn't put her in the water.

I didn't get back to fishing until 1:30AM Sunday Morning.  I went to Eddy's and they didn't have any no trespassing signs up so I fished at the Jetty.  The wind really kicked in shortly after I arrived.  I fished for an hour and a half getting two bites catching one.  I was going to hit the GOMH but went home ate some pizza and went to bed instead.

The rest of my time spent fishing resulted in no fish being landed and me not being able to fish at the Jetty because they had closed it off with police tape.  I did have a small walleye follow at Mac's and lost a toothy at the GOMH at sunrise.

Not the greatest Opener in the world, but I have had worse.  I should have gone to pick up the Trophy right away because Saturday, was the day to get it done.  The fish were on the chew.  The snow and cold and wind killed the bite for me on Sunday.
Posted by Basspastor at 9:44 AM