My Snatcher Tournament On Leech Lake 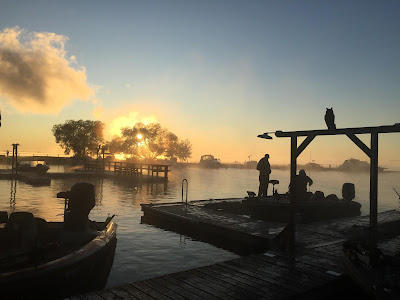 The Day:
I forgot to bring my sunglasses. Fortunately, my boater had an extra pair in his glove box.  Also, it was nice to draw a partner with dual consoles so I didn't freeze on the ride to Boy Bay.  We started in the reeds on the North end of Bear Island.  I got the first bite of the day on a junebug Craw Tube, but it got off.  I thought it was a bass, but my line was frayed so maybe it was a pike.  I got two other bites in the reeds.  The first one dropped it immediately and the second had me into a reed before I could even set the hook.  Wasn't able to get either fish to hit again.  After an hour of that, we headed for some rice.

We started shallow working our way along the rice line to deeper rice.  Ruff had a couple fish strike at his frog, but not hook up.  The second fish was 2/3lb bass that jumped completely out of the water but didn't get the frog.  Once we got to the deeper rice Paul but the first small keeper in the boat on a craw tube.  I think slightly before that Dennis showed up and started fishing about 50 yards up or so in the direction we were heading. I took that as a positive sign.  Paul got the second fish of the day as well.  He only got one more non-keeper for the rest of the day.  He had about the same number of bites as me.  Over the next couple of hours, I managed to get 4 keepers in the boat on the junebug Craw Tube.  I missed a couple of bites on a frog and a few on the Craw Tube.  By noon my upper back was sore.

At About 1:30PM we left the rice for the northern Shoreline of Boy where we fished a couple of docks, some rushes which transitioned into rice.  We didn't get anything.  So we went in search of reed beds on that northern shore.  Ruff got his short there. With an hour of fishing time left, we headed back to the rice and Dennis was there again.  We put into the rice about 50 yards away.  Paul missed a fish and then I got a keeper on a Green Pumpkin/Brown craw tube.  Shortly after that Dennis motored in much closer to us and informed us we came right in on the juice.  He also reported his non-boater Snatcher rookie Jon Notsch was kicking his ass.  I asked Dennis what size weight they were using.  He was using 1oz and said Jon used a 1/2oz, but Jon said he was now using a 1oz as well.  I ended up getting bit off so I switched back to the junebug Craw Tube and upgraded to a 1/2oz weight: I had been using 5/16th.  We motored back on the other side of Dennis and I quickly got my limit fish in the boat.  I got a fish that wouldn't help and got bit off two more times.  With 20-minutes left I got two culls on an Evergreen Frog including my big fish of the day.

The Results: My bass weighed 11/04 which put me in 10th Place out of 20 anglers. 1st Place and Lunker were caught by Keith Tuma (20/02) (4/01).  The Co-Angler Challenge was won by Beau Bacon for 4th time this year with a 3rd Place finish out of Tim Benson's boat.  Three anglers blanked and only 8 limits were caught.  Tough bite.

I ended up in 9th Place for the year

My Thoughts: I didn't fish particularly efficiently because I struggled with casting accuracy all day long thanks to a poor night's rest coming in and the really long day I spent on the water on Thursday. Other than that I thought I fished pretty well.  We spent at least half the day where there were no fish.   Once again a kicker fish eluded me. 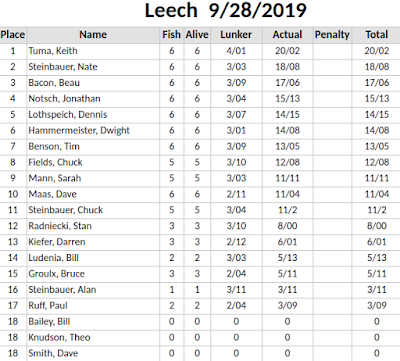 Posted by Basspastor at 8:14 AM