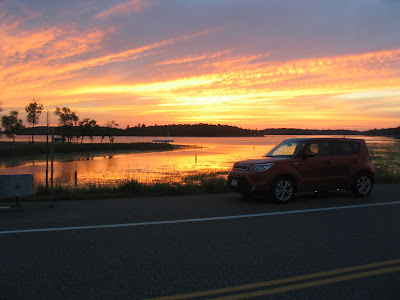 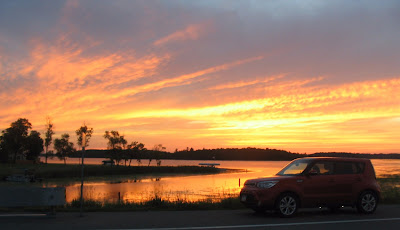 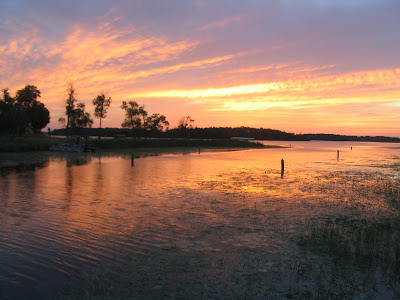 With the 8AM start I had time to stop by the Grumpy Old Man Hole before heading off to South Long.  I caught 3 small jumpin' bullheads on a white Strike King Spinnerbait. 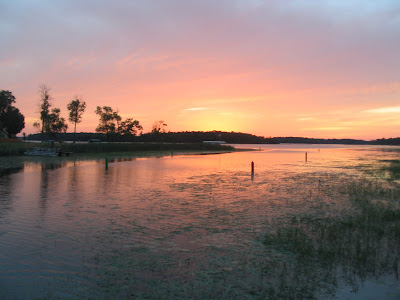 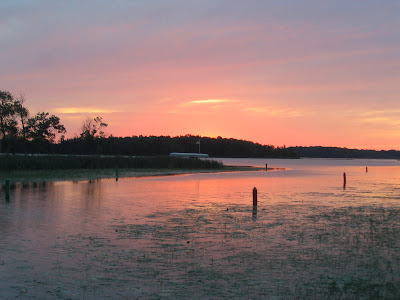 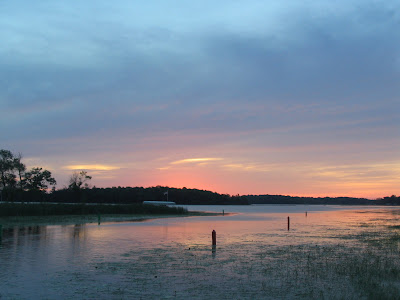 7:45AM-3:45PM South Long Lake
Conditions: 70-88 degrees, Windy to Extremely Windy out of the SSW, Mostly Sunny turning cloudy in the last hour or so.

The Day:  Our first stop was the points on the South side of the Channel into the South bay.  We worked our way NE than North after we went around the second point.  We didn't get anything on the points and were heading North to the docks.  I was throwing the Whopper Plopper across the channel towards the lake side of the other point.  The Plopper was almost back to the boat when a 14.25" hit it.  First keeper of the morning.

We worked the reed beds and Tony got his limit.  I wasn't getting any hits on the Horny Toad or a frog, so I started throwing a white Grass Pig on a weighted swimbait hook.  I got a 14.25", then I lost a fish at least that size when it got hung up on the very last reed before it was in the clear.  I then got a 13.95" bass and then lost the next one that hit me in the reeds.  We went and fished a dock.  I threw my fluke to a clump of rice and good fish jumped all over it, but I botched the hook set.  I couldn't get the fish to hit again.  We went back into the reeds. I think I missed two more hits in the reeds before I finally got my limit fish, a 12.5" squeaker.  We were a little over 2 hours into the tournament at this point and the wind was really starting to come up.

I think the next fish in the boat was Tony's big bass, a solid 3lber.  We decided to go back and start all over in the reeds.  As we were coming to another reed bed I made a fairly long cast with my craw tube and 15 incher picked it up.  That was my big bass of the day and the only one I would get on the craw tube.  I did also get a rock bass and a green sunfish on the craw tube that I thought for sure was going to be a bass by the way it hit.
We went for a long stretch without getting anything.  Eventually we started getting fish again.  I culled out my second fish with a 13.5".  Don't remember what I caught it on, the swimbait maybe.  I started throwing the double Colorado blade Strike King Spinnerbait and I caught a pike, then a rock bass, then a 12", then my final cull of the day with a 14" on it.

With a little more than an hour left it seemed like the wind was quieting down, so we ran up the lake to the other spot we got fish while pre-fishing.  That was a mistake as it was still whipping around up there.  We tried it for about half an hour then headed for the SE shoreline which was still in the wind.  I looked in the well and one of Tony's fish had expired.  After getting nothing there for 10 minutes we called it quits.  I don't remember exactly when, but shortly after Tony pointed the boat towards weigh-in we hit something, spun the hub, and bent up the prop pretty bad.  We waved down Guy who towed us to weigh in.

Results:  My limit weighed 8lbs 10ozs, which put me in 16th Place out of 21 anglers.  Tony's fish weighed 13-14, but the 2oz penalty cost him 3rd Place because Guy with whom he was now tied had the Lunker for the day at 4-7.  Chuck Steinbauer was the tournament winner with 16-2.

My Thoughts:  Tony's boat control in that nasty wind was excellent.  With a little better luck in landing the fish that bit I may have had a shot at being in the Top 10.  Lost fish are part of the deal in the reeds.  I did beat my weight by 14ozs from the tournament we had on South Long on 6/21/09, but my place of finish is one place worse this time.

In AOY I'm 4 points ahead of where I was at this point last year.  I finished in front of the two guys that were behind me at Birch. Unfortunately I didn't manage to finish in front of anyone who was in front of me either, other than two guys who did not fish this tournament.  I am going to have to fish better if I'm going to make my goal of finishing in the Top 10 for the year.


Next Tournament: Fishhook Lake at Park Rapids on July 16th.

Posted by Basspastor at 4:47 PM