I decided to head out of the Platte Lake Access where I knew the ice was safe.  I decided to head out to the 14 ft hole as marked on my Lakemaster Chip.  I was out farther than a couple of guys who were fishing tip ups.  I drilled two sets of two holes.  I put a minnow down one hole and I jigged the other with a tungsten jig with a wax worm.  I had my Vexilar turned all the way up to 10, thinking it was on 1.  Not a whole lot was going on.  Finally a fish came in and bit, but I didn't have my drag set for the 2lb test I put on the reel and it stole the tungsten jig when it took a run.  My bad.  I decided I was going to have to switch a couple of reels a round when I got home.  I decided not to tie anything on the rod with the broke line and switched to the rod with a black and white glow T.H.E. Jig on it.  Finally I figured out I had the Vex set to high.  I thought I wasn't gonna catch anything so I took a couple of pictures. 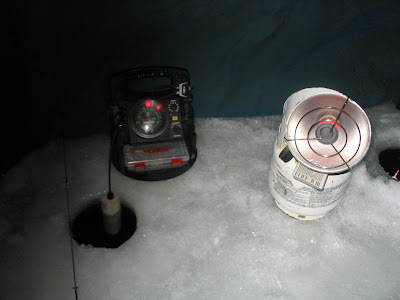 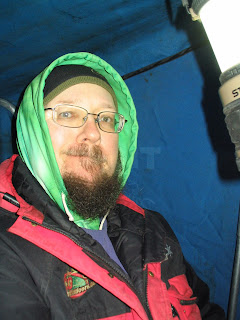 But then I marked something and caught it.  That was the last bite I got.
Posted by Basspastor at 10:11 PM