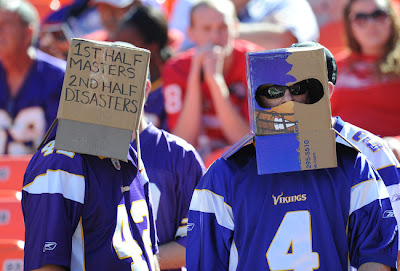 Possible, but I don't think so.

The worst team in Minnesota Vikings history was the infamous Les Steckel team of 1984 that went 3-13. Currently the purple have only 2 wins with 3 games to play. I would say chances are better than not that the Vikes win at least 1 more game this season. I even think there is a chance this years club could upset the Saints in the next game and then run the table. I suppose a lot depends on what happens with AP and Ponder. Ponder clearly wasn't ready to play vs. the Lions and in my opinion should have been benched after he threw the pick 6. However, I don't blame Ponder for the 1st play fumble touchdown which was on Loadholt. I am guessing that AP will be back in the lineup vs. the Saints and barring re-injury will play the rest of the season.

This Viking squad has only been embarrassed twice this season, at Green Bay 45-7 and at Chicago 39-10 vs. a healthy Bears offense. The Vikings have pretty much been within a touchdown in the rest of the games (yes they lost by 10 in Atlanta, but the Vikes would have had another touchdown had Frazier challenged). The 1984 Vikings were blown out 6 times by at least 3 touchdowns, including a 44 point loss to the 49ers. In 1984 the NFC North wasn't one of the best divisions in the League. Clearly this team isn't 1984 bad even if they only finish with 2 wins.

Some people are calling for Leslie Frazier's head, but I am not among them. I do understand the sentiment as the level of coaching play seems to have been pretty poor this year in many aspects and respects. Still I think Frazier deserves a true full year of coaching, which he did not have this year due to the lock out.
Posted by Basspastor at 1:53 AM