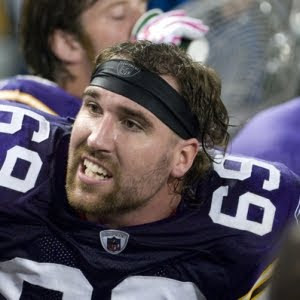 In the post game interviews Vikings Star Defensive End and one of the only good reasons to watch the team at this point was a unhappy camper in post game interviews. Apparently he was held out against his will towards the end of today's blow out loss. Jared is having a great season and is within reach of NFL and MN team sack records. YES stats and records matter or we wouldn't keep them. What in the heck was coach Frazier thinking?

I'm now starting to lean towards Frazier being fired. I'm going to have to give this some thought.
Posted by Basspastor at 12:15 AM

Dave I have said all year I didnt think Frazier was head coach material! Except for their secondary, this team has enough talent to do better than it did, they just didnt have the leadership they needed to stay motivated and stop making stupid mistakes! I say fire the whole coaching staff and start over!