Note-The lack of blogging lately is in no small part due to lower back problems. You can bet I would have been in early on the Alabama Rig buzz had I been able to comfortably sit at the computer. 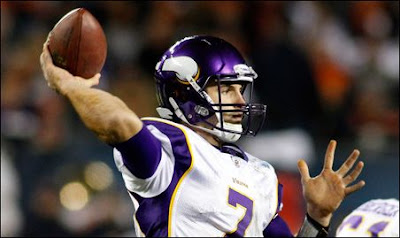 I don't think it's an exaggeration to say Christian Ponder got off to a great start as the Vikings starting QB, when he nearly through a TD on his first pass and soon after that found Shiancoe for 6. And all things considered he had a pretty good game. Honestly, I had no idea what we were getting in Christian Ponder. I don't follow College Football and I didn't look into him when he was drafted. In the pre-season he looked like a good athlete, but to me didn't look ready to be a NFL QB yet. After his first two appearances in the regular season, things look positive. This kid might be pretty good, which is something the Vikes need desperately in a Division with excellent QB talent. If nothing else he and Adrian Peterson give us Vikes fans something to watch for the rest of the season.

I was a little unhappy with the Vikings final drive of the game. It started with yet another special teams screw up that backed us up to the 2 yard line. We got out past the 20. After an incompletion on 1st down I really thought the Vikes needed to run the ball to get some yards as Adrian was having a very good day. We threw the ball instead and the drive ended with 3 straight incompletions. Lousy play calling added to having Percy Harvin out with an injury and with a nicked up Shiancoe it's impossible to blame Ponder for not leading a come from behind upset of the Packers.
The Vikes elected to kick, which is a call that could have gone either way facing 4th and 10, and the D gave up two rushing first downs and it was game over.

The Vikings Defence had their moments today, but they were mostly bad. However the Pack is the best offence in the NFL, so what are you gonna do?
Posted by Basspastor at 12:43 AM

Ponder does give us some hope, and at least makes it interesting. I was wodering if you've been catching any lately? I keep thinking someone is going to post a pig for the derby. I did get one more for the derby. I am still hoping for a big smallie from the river to help me out, but its pretty rare to crack 20" on the big muddy for me.

One of these days I will get around to updating the Derby when my back is up to it.