Conditions: 63-85℉, Mostly Sunny, 0-15mphSW
My Day: We got all the boats launched, then we headed to our starting spot, which was just to the South of the Public Access in the reeds. We worked our way South along the reed line with Beau pitching a jig and me throwing a frog. I think I got the first bite of the morning in some pads and reeds up by the shore. It was a small fish that got off after I had reeled it in about 10 feet. I am pretty sure it was a bass, but I'm not 100% certain. The reeds came to an end, and we worked the cattails and docks for a little bit with Beau catching two pike.  It wasn't happing, so we ran to some other reeds. I got the first keeper in the boat with the frog. Beau then caught a 2lber on a jig. Shortly after that, I got my final keeper of the day on the frog. As we worked the reeds. I would get hung up occasionally. I would put about 15lbs of pressure on my 50lb braid, and my line kept breaking, frustrating. After about the 5th time that happened, I switched to a different rod. Beau got his second keeper and missed some bites. Beau spotted what he swore was a muskie. I saw the fish but only saw its back.  I had a fish swirl on the frog but not get it. Neither Beau nor I could get it to bite again.  Beau switched to a Senko and got a couple of good fish. I switched to a Yum Dinger and missed one bite. The wind came up, and we headed to a weedline spot. I missed a couple of bites on the Havoc Pit Boss. Beau filled out his limit on the Senko. I switched to a Yum Dinger and got a couple dinks and a pike on that, and the day ended with me only getting two keepers. I thought maybe I was headed for a last-place finish, but it turns out lots of people struggled on this hot, windy day.

Results: My two fish weighed 4/05, which put me in 15th Place out of 21 anglers.   Mick Ziebell won the tournament with 19/03 and got Lunker with a 3/15 fish. Dave Smith got 2nd Place and won the Co-Angler Cash out of Dennis Lothspeich's boat. Great Job, Dave! Nate Steinbauer got 3rd. Beau came in 4th.
My Thoughts: What a frustrating day. I let the frustration get to me with Beau catching fish and me not getting bites. I think I just fished too fast and didn't concentrate on what I was doing enough. Once we left the reeds, I just couldn't get settled in mentally and didn't fish well at all. Thankfully we have two more tournaments this year for things to come together for me. On to Leech. 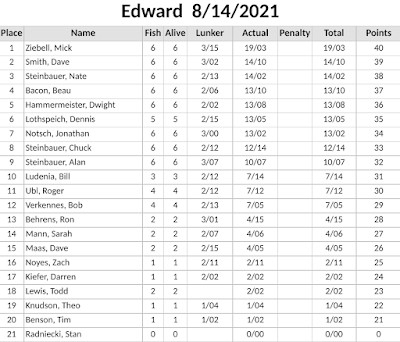 Posted by Basspastor at 9:55 AM