The Day: We started a little way to the South of Access Bay, just outside of some slop. I thought I had something pick up my jig under a dock, but when I set the hook, there was nothing there. We ended up working a weedline outside of the slop bay, and Mick got his first bass on a craw tube. From there, we ran to a point with a hazard marker buoy. Stuff was getting busted on the top, and I got several dinks on Bubble Walker. Mick got a quality fish on the craw tube. We then ran to a weedline that I had fished before in a previous tournament; Mick was unaware of that fact at the time we arrived. I got a pike on a black/blue Hack Attack Jig and then got the skunk out of the boat on my very next cast. We then went to the small island outside of Access Bay. Mick got his third keeper on a craw tube, and I had my Hack Attack Jig get a bit off. Mick caught a long skinny pike. I think we then went back to the point with the hazard buoy working some docks before we got to the point then heading north. I got my second fish on a Neko Rigged Yum Dinger. We moved around to some other spots catching a few dinks under 12-inches.  It was turning into a long day. With an hour left, we went back to our starting spot. Fortunately, Mick came in close enough to the slop that I was able to make some casts to it, and sure enough, my big of the day inhaled my frog. So we worked the junk. Mick lost two bites, and I got #4, pitching the Hack Jig to the pad edge. We reworked the small bay a second time, quickly not getting any bites. With about 20-minutes to go, we ran to the Access Bay, and Mick picked up two more keepers, and I got my last fish on the Bully Wa 2 Frog with 5-minutes left to go. And just like that, time was up. If we had 15 more minutes, I think chances are pretty good; both of us would have caught our limits.

Results: The last-minute rally ended up giving both Mick and me the same weight for the day at 10lbs 9ozs. I won the tiebreaker and finished in 8th Place. Chuck Steinbauer got back into the Winners Circle with 18/12, and he had the 4/04 Lunker. Darren got 2nd with 17/7, and The Hammer got 3rd with 16/3. Todd Lewis won his first Co-angler Challenge.

My Thoughts: For the second time this year, I was able to rally in the final hour to save myself from a disastrous finish. The lake was fishing tough with only 7 limits boated. It is pretty amazing to me that I was unable to get more than 1 keeper on the Neko Rig for as much as I threw it. I had little fish picking at it constantly, and I caught several dinks. One more keeper, and I would have beaten Dennis. Instead of my season being trash, this result gives me some hope for finishing in the Top 10 for the year; currently, I sit in a tie for 14th. 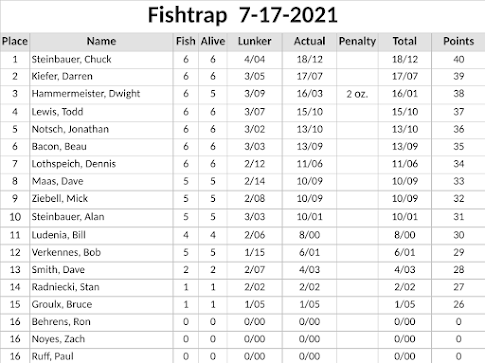 Posted by Basspastor at 3:23 PM