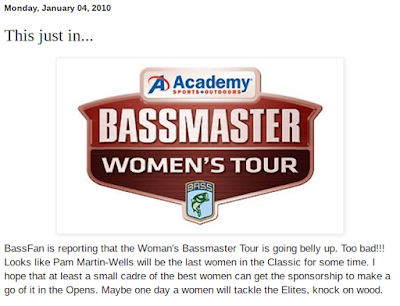 So I was reading through my blogs from January 2010 and I came across this one announcing the end of the ill-fated Bassmaster Women's Tour.  I was bummed out about it at the time.  So here we are 10-years later and it would seem that women haven't made any progress in that time in the world of professional tournament bass fishing.  The one exception to that is Kristine Fisher who has made a name for herself in the kayak tournament scene.  Kayak tournament fishing is in its infancy but is exploding in popularity and Kristine's success speaks for itself.

So what will the next ten years hold for women tournament anglers?  I think incentives for women are such that it is too easy for them to get sidetracked rather than perfecting the craft required to be competitive against the men. I don't see reaching success at the top levels of the sport.  I hope I am wrong about that.  I would love it if there are more unicorns than just Kristine.
Posted by Basspastor at 2:16 AM