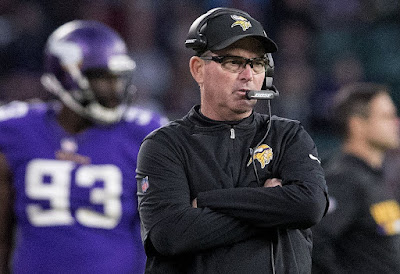 Seeing as how Chicago was the only team in the Division to win this week our loss to the Bears isn't the end of the world as we are only a game back.  The team just couldn't get out of its own way yesterday.  The penalty on the play Trubisky got injured and fumbled.  The multiple holding penalties and fumbles just doomed us on offense.  The missed bomb to Theilen when Kirk wasn't pressured on the first drive of the game.  Losing Trubisky may have been a stroke of good luck for Da Bears.  I've got to give the Bears credit for shutting our running game down and holding the ball for so long in the first half.  Starting the second half with a pass play was a poor strategic choice in my opinion.  I thought the Vikes gave up on the run to easy in this one.  Well, that is now water under the bridge.  We have got a rookie quarterback to beat next week.
Posted by Basspastor at 8:58 AM