Opener Gold! GOMH Not So Much

Midnight to 4AM
Conditions: 38-33 degrees, Windy out of the North, Cloudy turning partly cloudy,  it sleeted for about the first hour.
When I arrived at midnight and saw the conditions I thought this is something I can work with.  Waves were coming in hard out of the North.  I put on a Rippin Rap.  After one color change it was fish on.
I was lucky to land her as she slipped out of the net.  I dragged her on shore by the lure that was hung in the net.  Once she was just barely safe on the rocks she came off.  I decided to do the netting from the dock after that episode.  I missed the next bite I got which felt like a good one.  For the next three fish no net was needed.


I decided to throw the X-Rap off of the dock and was rewarded with this 22" fish. 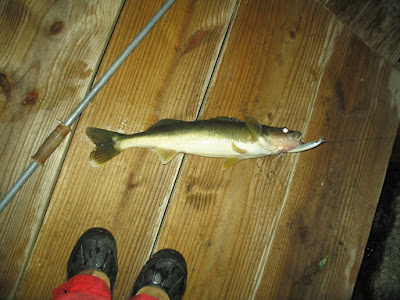 After this next fish I was getting cold so I went to the car for a half an hour to warm up.
After getting back from warming up I promptly backlashed cutting my line at the reel.  I quickly grabbed my Mojo Crankster and another different colored KVD Jerkbait and started casting hoping to catch my line.  I caught the biggest walleye of the night instead.

After not connecting with my line and not getting anymore bites on the KVD.  Some people from the resort came out and asked what I was fishing for and if I was having any luck.  I tried a few different lures finally connecting after several missed hits on an Ultimate Jerk Shad.
It was coming up on 4AM and I was getting cold again, so I decided to head home, pick up some bass stuff and head to the GOMH.  That move didn't pay off.  I didn't catch anything and only saw three small toothy's get caught.  Nothing at Bulldog and Rock as well.  I called it quits at 7:00AM

I put new Fireline on the Mojo Crankbait Rod 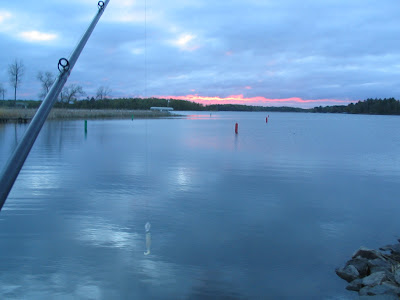