Because it was something I didn't do last year.  This report is from Feb. 6th.
4:15-9:15PM
Conditions: Temp 33 degrees, mostly cloudy to cloudy, some sleet, windy out of the South

I got out a little later than I would have liked.  I picked up some minnows at Bear Trax and drove out onto the ice.  Someone had been fishing in my area earlier in the day, but was gone by the time I got there.  I drilled a couple holes in 16 feet.  Then drilled holes up by the maidencaine.  I didn't bring the camera with me.  Going shallow was a waste.  At about 5:15PM I went to the deeper holes and spent the rest of my night there.  I caught a crappie first on the VMC Tubby Jig with maggots and Gulp Minnow.
Then I got the pike.  Then it was crappies coming in pretty consistently on the VMC Jig.  I had a couple of minnows stolen before I got any crappies on them.  It started sleeting around 6:30PM so I put the ION in the truck.  I had a mark come through at about 8 feet.  I thought it was going to be a bullhead, but it was this chub of a sunfish. 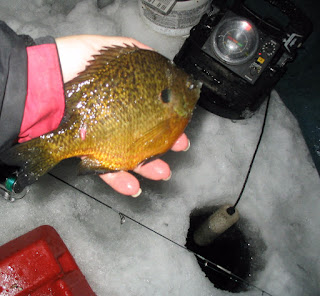 The minnow got hot and I landed the biggest crappie of the night on it.
I ended up with 10 crappies on the Glow Demon with a minnow and 13 on the VMC with maggies.  Most fish were right about 9 inches with one potato chip.  I may get out before sunrise tomorrow.

Getting a pike is always exciting. Looks like a solid day of fishing.