The Day: We blasted off for this one at around 6:40AM which is nice.  It became quickly apparent to me with Chuck getting bites almost immediately on a stick worm and nothing going on topwater that finesse fishing would have to be a bigger part of the program than I wanted it to be.  I switched to a Z-Man TRD on an Outkast Perfect Ned Head and caught me a 9" dink and a rock bass.  I didn't get a hit on anything on the next two spots we tried.  I finally got my first keeper in the boat on the Ned Rig at Darrin's Point. The fish was 14.5" long and in my haste to get back fishing I didn't weigh it till later.  It ended up being the smallest fish in my bag at 1/7. I then caught a line burner followed by my big fish of the day at 2/8.  We then went to the spot Chuck got a nice smallie and a couple of good lmb's on in pre-fish.  I caught a 2lber and Chuck got bupkiss.  We then went to the public access where I got a couple of small topwater fish that would take forever and a day for me to cull out.  I did manage to get rid of the line burner and the one I replaced him with on our next stop before we hit a long dry spell.  We came back to that weedline spot later in the day and I got an upgrade that stuck along with some dinks and a multitude of rockies.  In the final hour, we hit one of Chuck's old spots, and both upgraded a couple more fish.  We spent the final 20-minutes down by the landing where there was a chop on the water. I had two fish hit at the Whopper Plopper and not hook up.

The 6th Place finish is my 3rd best finish in the 1st tournament of the year.  It looks like we are going to have small fields this year and there is a possibility we won't make up the first tournament which was postponed.  Every point counts and this finish gives me a leg up in finishing in the Club Super 6 at the end of the year.

My Thoughts:  Pre-fishing is a big deal for my confidence level. Last year the late June tournament was held on Alexander under similar circumstances, but I was unable to pre-fish that one.  The report coming in last year was that the bite was on fire.  When it wasn't on tournament day I got caught flat-footed and never got comfortable with what I was throwing.  I only brought in 3 fish that day.  This year I was prepared for what I was going to throw if the fish didn't cooperate and the plan worked out pretty well.

I should probably pick up some more of those Outkast Perfect Ned Heads.  I only have 3 of them. 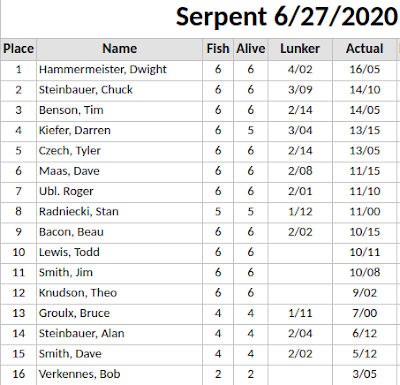 Posted by Basspastor at 9:34 AM