Thoughts On Cheap Hits to Quarterbacks In the NFL 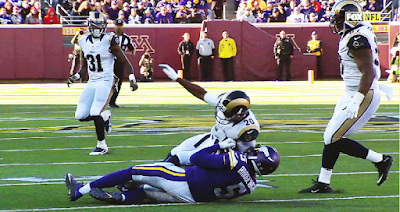 In case you didn't see it, Teddy got knocked out cold by a cheap shot while he was sliding. 15 yard penalty, that was it. The Rams player wasn't even ejected. The Vikes D played amazing and our special teams and AP managed to get the victory in overtime.  The Vikings QBR went from a respectable 65 with Teddy to a dismal 1.7 with Shaun Hill.  It's almost a miracle that the Vikings won the game.

I hadn't really thought about this before today. But a cheap shot/late hit/illegal hit on a QB, that knocks a QB out of the game should result automatically in the other teams starting QB also being not allowed to play the rest of the game. It's a fair solution that hopefully would lead to less questionable shots being taken at QB. Losing a starting QB to a cheap hit puts the team that loses their QB at an extreme competitive disadvantage; Back up's are back up's for a reason and they don't get the reps that a starter gets.

I think this should apply at all levels of football.
Posted by Basspastor at 1:41 AM