A Day on the Lake with BP Bass Pro Jim Moynagh 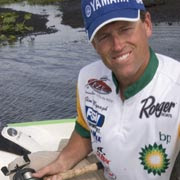 On Thursday October 2nd I got to spend a few hours on Lake Minnewashta in SW metro fishing with BP (fuel) Fishing Pro Jim Moynagh. Jim Moynagh has won over a million dollars as a professional bass fisherman and is the most successful bass fisherman Minnesocold has ever produced on the elite levels of bass fishing tours.

Our day fishing:
We met at the Lake Miniwashta Regional Park a little before 10am and were on the water and fishing by 10:30am. We took a short boat ride down the shoreline so we could start fishing the deep edge of a milfoil covered weed flat. Jim chose to throw a Salmo Boxer Crankbait in a color that looked to be sort of bright orange. 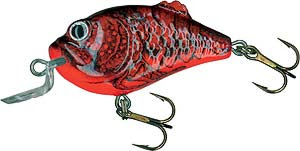 The Boxer is a buoyant fairly large and fat crankbait and the one Jim was using dived to about 5-7' and had a straight rather than the bended lip. Jim is sponsored by Salmo.
It was just a few casts for Jim and it was "fish on." He landed a healthy 3lb plus bass. A great way to start the day. I started off using a black single Colorado blade spinnerbait with a rattle. I believe I caught the 2nd and 3rd fish but they turned out to be hammer handle pike. The wind was blowing straight onto the flat we were fishing and Jim got the 2nd bass of the day on the Salmo, it was another solid 3lb fish.

I had some items that I wanted to ask Jim about and I was more concerned about hearing the answers than fishing and that is my excuse for missing about 3 or 4 solid bites on the spinnerbait. I will do a separate blog on the topics that Jim and I spoke about while on the boat.

The fishing wasn't fast and it wasn't real slow. As we approached a point that comes off of the flat Jim tied into a solid fish, which turned out to be this 4lb bass: 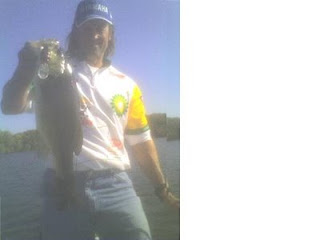 Sorry about the Picture quality, it was a camera phone picture.

Jim managed to land a second bass off this point off the flat and I was getting nothing on the spinnerbait so I switched to a jignpig and did get a hit on that, but I missed it. Jim also switched up to a jigNpig missed a bite then connected with a pike. There were a lot of baitfish on this point and Jim had high hopes we would hit a good school but all we got were those two bass and a pike. Eventually we kept heading down the flat towards the access we launched at. Jim resumed throwing the Salmo Boxer. I think he landed a pike or two and I switched up to a Strike King Red Eye shad without any luck, than switched to a rattletrap that was similar in color to the Salmo Boxer that Jim was throwing. We were just about straight out from the access when I got a hit and landed a solid 2lb bass. As I was reeling in Jim hooked into another bass that was close to if not over 3lbs. I got my fish out from the boat and Jim got his close into the boat. Jim remarked that this goes to show that the fish are scattered and not bunched up in schools. We worked this area thoroughly but didn't get another fish. As we worked our way North, I think Jim got one or two more nice bass on the boxer and a pike, but I wasn't getting anything.

We tried retracing our steps and went back south, but we didn't have much action except for maybe Jim catching a pike. At this point we had about an hour and a half before I wanted to be off the water, so Jim suggested we try some pads and docks on the South end of the lake. It was pretty sunny and Jim thought the fish might want so shade.

We were seeing a lot of sunfish up shallow but almost no bass to speak of until Jim spotted a good fish that was just sitting out in the open in a hole in the weeds quite a ways out from the closest dock. The fish didn't even look at the Terrain Stick, but when I put the Horny Toad down there it inhaled the white toad. I set the hook and came up with absolutely nothing. Jim threw the Terrain stick back at it and this time the fish quickly inhaled it and Jim had yet another 3lb bass.

We kept working our way down the bank and Jim started pulling a few 12" to 14" bass off the docks. I started throwing a bubblegum Zoom Super Fluke at the docks and missed my first pick up. I think I had one more shot at a fish underneath a boat lift, but I got hung up and had to break off. We came to the end of the bays docks and it was time to head in.

I think Jim out-fished me on bass about 10 to 1. Regardless of my lack of luck, it was a fun day on the water. 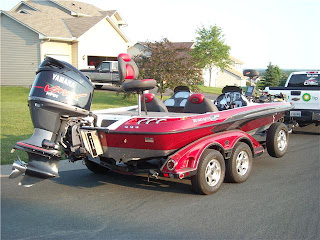 Posted by Basspastor at 5:20 PM