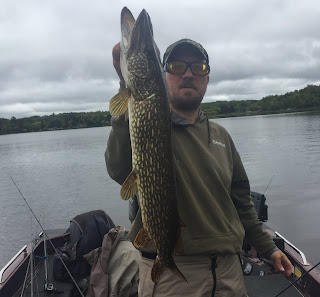 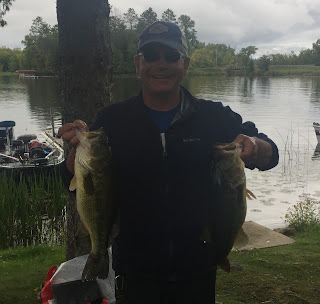 The Day: We started in the reeds just to the East of the YMCA Camp in Little Boy. I may or may not have missed a couple of bites. After about an hour and a half with nothing to show for it we left the those reeds and headed to some reeds on the NE side of the lake. Bill missed a bite along a tree in the water. I had something very pike like attack my Fluke and get off quicky in the reeds. I had a couple other boils, but nothing hooked up. We then went to the dock by the outlet where Al had already taken a fish. We then headed to Wabedo. We started fishing to the east right at the entrance to Wabedo. Bill was working the shoreline reeds and I was throwing out with my orange Shower Blows knock-off. I had a 35 or so inch muskie jump over the lure and miss thankfully. From there we went and worked a weedline.  Finally, I got the skunk out of the boat with 2.5lb bass on a junebug Piranha. Bill then caught a line burner on a Senko. Then he got a fish that almost went 2lbs. I got a pike on a craw tube. It was calm and overcast. Perfect topwater conditions. I started throwing a River2Sea Bubble Walker. Something boiled behind the lure. I let it sit for a few seconds then popped it. Whoosh, the 6.5 pound pike took it. After putting up a good fight Bill netted it for me. Thankfully, It didn't put up any fuss in the boat and the hook came out easily. We fished Wabedo for maybe 15 more minutes then headed back to Little Boy with maybe 2 hours left in the day. We went back to the YMCA camp area starting to the West of where we did in the morning.  There is a breakwater at the camp. I made a cast to it with a bone Shower Blows and good bass blasted it. It jumped got down in the weeds and came off. I was not happy. We worked the reeds again. I had something pike like take a shot at my Spro Sprinker knock off and not hook up.  Bill was pretty frustrated as was I. I suggested we move in closer to shore into an area that was good for me and Al in the last tournament. We started working the pads and rice, nothing. Then we came to boat lane. I probably should have directed Bill on how to best approch the high percentage area. Sure enough there were a couple of fish there. I got a decent hookset, but the fish quickly got off. It was 2 to 3lber.  Bill put on frog as I peppered the area. I think he got a bite on his third cast by a smaller fish that didn't hook up. We came to the next boat lane and sure enough their were two fish in the high percentage area. We both landed our bites this time. That happened right in front of Hammer and Checkbook who were working towards us.  We quickly ran out of slop. With 20 minutes left we went to another slop area where Bill lost a fish and I caught a pike.  I was quite disappointed to only bring in two fish and thought I would be a bottom dweller for sure. But a lot of guys struggled, so I reached my goal of a Top 8 finish.

My Thoughts: I don't know what the fishes deal was. I would have thought everbody would have come in with limits under those conditions, but the fish were just not up and feeding like you wold expect in the Fall. 2/3rds of the field caught 3 or fewer fish. Ouch

We figured out something that would work to late. Oh well I am now in a three way tie for 4th in the Angler of the Year. It looks like I stand a decent chance of making the Clubs year end Super 6 provided I don't skunk at either of the final two tournaments, which are back to back the first weekend of October on Gull and Cedar Lake. 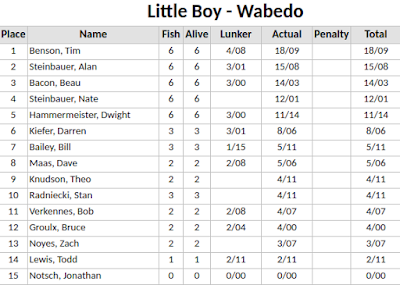 Posted by Basspastor at 4:56 AM